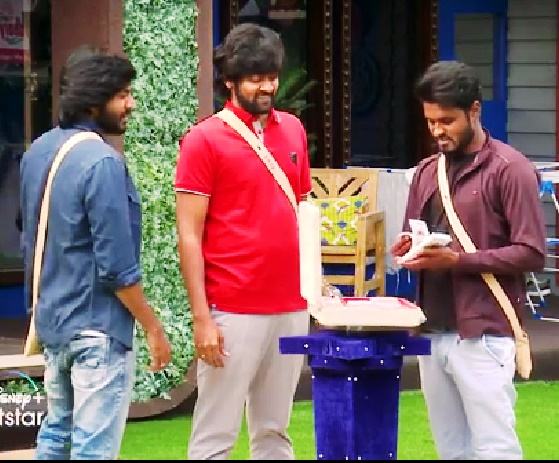 Ciby is known among Tamil cinema audience for playing the role of a student of actor Vijay in the recently released film “Master”. Prior that, the actor made his debut through a film named “Vanjagar Ulagam”. The aspiring actor who was believed to become one of the finalists of the show, left the house after the cash prize improved from Rs. 9 lakh to Rs. 12 lakh.

Couple of days ago, actor Sarath kumar who entered the Big Boss house to promote one of his upcoming web series, provided a suitcase that contained Rs. 3 lakh and asked the followers to take it and leave the house. No one showed interest to grab the suitcase due to less amount as a result of which, the price money kept increasing.

During 5th of January, the amount got increased to Rs. 9 lakh at 7 : 20 PM. While contestants were discussing about how much they would like to get to walk off the show in midway, Thamarai said that she won’t touch the suitcase even if it provides Rs. 1 crore. When the amount got increased from Rs. 9 lakh to Rs. 12 lakh, Ciby came forward to take the money and leave. The episode of Ciby walking off would be telecasted on Thursday, says reports.

Among the seven, Pavni, Priyanka, Raju, Thamarai and Amir are looking strong with full potential to win the title. Ciby who could have thought that either himself or Niroop will be eliminated in the upcoming weekend show, walked off with the money. As soon as the news got broke out, a number of reactions about Ciby’s decision are surfacing in internet.

It’s ok tho ..U PLAYED RLLY WELL ..that too this week u were ROCK ON man 🔥

Have a great life ahead ..

the highest amount of any season is taken by u ..BE PROUD OF UR DECISION 🔥#BiggBossTamil5 https://t.co/RUVyUpLWjj pic.twitter.com/Yd0qVL3G2Y

Good move #Ciby ♥️ I badly wanted u to b in top 3 but…its fine…Respect ur decision
Great frnd of #Raju from day 1
Especially last 2 weeks u were amazing
U ll missed Ciby la🥺♥️ https://t.co/676SxV9omH pic.twitter.com/0UASBEcbhU

Unfortunately two undeserved people in the house have a chance to go to the finals now instead of a sure finalist.
Anyway, it’s good money. Well played and good luck @cibychandran #Ciby #BiggBossTamil5 https://t.co/oZvkMi2ENk

This was a smart from #Ciby
He was saved last sunday and despite unofficial voting no one knows really whats the saving order.

Ciby always wanted to go out on his own terms.

Previous articleInternet Reacts To The Announcement Of Third Lockdown In State Tamil nadu !!
Next articleAshwin’s First Ever Tweet About The Audio Launch Event !! Check Reactions

India's match against New Zealand which is due to be held in Nottingham later today (June 13) is threatened by a high chance of...