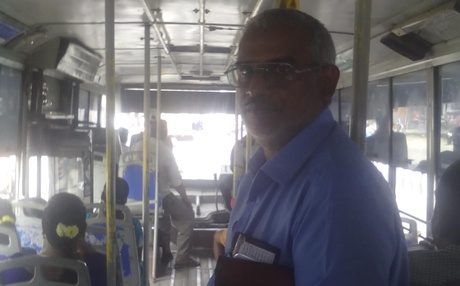 On a Sunday afternoon, a lady passenger boarded the D70 bus at Velachery and gave conductor Kannan Rs 100 for her journey to Ashok Pillar. As Kannan did not have change, he requested the commuter to collect it from him before she gets down at her stop. Around 1.20 PM, the commuter got down near Ashok Pillar and accidentally forgot to collect her change.
When the bus began to move from Ashok Pillar, the conductor immediately remembered the money he owed the lady and ordered the driver to stop. He called after the woman passenger and returned the Rs 87 balance amount. The delighted-woman did not even bother counting the money and thanked him with a satisfying smile.
When asked about his act Kannan (53) said, “Being a conductor it is my responsibility to make sure that the exact change is given back to my passengers even if they forget to ask me. Everyone earn money in a hard way, so no one has the right to take the money which belongs to others even if it’s just a rupee.”
The fellow passengers who saw the entire incident unfold in front of their eyes were completely surprised and applauded him.
Vijaya, one of the commuters said, “I travel in buses on regular basis and have seen many passengers arguing with the conductor for a rupee or two. The goodwill act by the conductor is something that needs to be appreciated as one doesn’t get to see such people quite often.”
Another commuter Ravindranath said, “The conductor deserves to be appreciated for his gesture. His honesty needs to be followed by others which will make the country a better place.”
Kannan has been a conductor for the Metro Transport Corporation (MTC) for the past 21 years. We hope that his small gesture of honesty be replicated in our society.
This story was reported by CL Ramakrishnan
Source : The New Indian Express