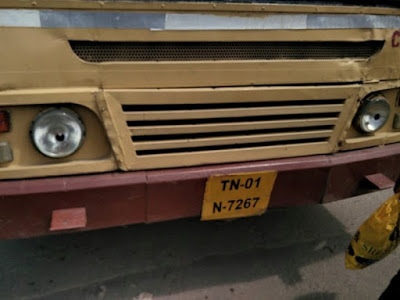 Today(28/10/2015) at around 12:45 this bus was blocking the on going straight traffic from Thiruvanmiyur bus terminus towards the tidal Park signal. I asked him to behave with courtesy for the on going traffic, but instead of apologizing, he abused me on the middle of the road. Just because I clicked a picture, he said I can’t do anything about this. I don’t want to take action against this driver. But CTP can regulate this by instructing the MTC to follow the rules or this Lane can be separated by the barricades so that the accumulation of this on going traffic could be avoided. Hope CTP works on this. Thanks.
-Sathya Vijayan‎
Previous articleThis guy gets free patties at Mumbai Airport !
Next articleO.Panneerselvam’s Recommendation Letter For A Girl For Getting Her A Job

Priya Bhavani Shankar’s Fitting Reply To A Follower Who Asked About Her Bra Size!!

Priya Bhavani Shankar who is awaiting a handful of films of her to release in big screens, conducted a chat session with her Instagram...

Several reports from various news portals emerged on Sunday alleging that the star couple of Kollywood Vignesh Shivan and Nayanthara tested positive for...