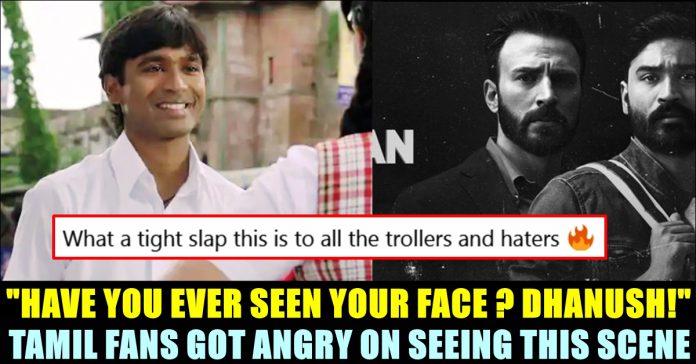 A particular video clipping from a Bollywood web series which is allegedly mocking the looks of actor Tamil actor Dhanush is doing rounds in social media platforms for the past couple of days. After Dhanush got committed in the highest budgeted Hollywood Netflix film “The Gray Man”, fans of the actor and Tamil cinema sharing the particular video and slamming the makers and actors of it who made distasteful comment about the looks of the Tamil nadu born actor. Earlier, fans expressed their disappointment over the media portals of western countries which mentioned Dhanush as an actor who belongs to Bollywood film industry.

Dhanush made his International debut through “The extra ordinary journey of Fakir” in 2018 and this will be his second International project. The film is reportedly based on Mark Greaney’s 2009 novel of the same name and revolves around freelance assassin and former CIA operative court Gentry (Going to be played by Ryan Gosling). It follows Gentry as he is hunted across the world by Llyod Hansen (Chris Evans), a former member of Gentry’s CIA team. The film is going to be made of a budget of 200 million US Dollars which is equal to Rs. 1470 crores of Indian currency.

As soon as this announcement surfaced, entire Tamil film industry felt extremely proud and poured their wishes for the actor. Fans of the actor shared about the news through their respective social media platforms. Meanwhile, a number of fans felt that it is the right time to give back to the haters. Music director Sean Rolden uploaded a post trolling the haters of Dhanush who trolled him for declaring Dhanush as “Indian Di caprio” three years back. Read : “Kalaaichingale Da Sumbaigala”- Celebrity Replied To Dhanush Haters

Meanwhile, few fans uploaded a video clip from a Bollywood web series named “Little things” in which we could see the actors using Dhanush’s name to criticize the looks of each other. “Have you ever seen your face ? Dhanush !” a person in the frame says to his friend to which the other two are responding with a laughter.

While celebrating Dhanush’s inclusion in “The Gray Man”, a fan shared the video and wrote “What a tight slap this is to all the trollers and haters”

Can't measure how much proud we are because of @dhanushkraja sir 🔥😍👏#TheGrayMan #Dhanush pic.twitter.com/xWSFGY7H7R

“Plz give us the name of this shitty web series!! How can this guyz insult a International actor like that.. He didn’t came to Bollywood.. He was invited.. And main thing ur 100 BTown actors = 1 Dhanush .” an ardent fan of Dhanush wrote after seeing the video.

Plz give us the name of this shitty web series!! How can this guyz insult a International actor like that.. He didn't came to Bollywood.. He was invited.. And main thing ur 100 BTown actors = 1 Dhanush .

Dear @DeShobhaa , writers of Little Things and the toilet tabloids of Bollywood- next time you make comments on @dhanushkraja for his color, do remember that he made it into Hollywood with A-list actors and directors. Now you take that !

I was just watching Dice media-Little things. The joke on Dhanush is so untasteful (S1 E3 05:25)
Apparently you look like Dhanush is an insult. Seriously??? @DiceMediaIndia

So far Dhanush has acted in two Bollywood films namely Raanjhanaa and Shamitabh with Sonam Kapoor and Akshara Haasan respectively. Currently he is working in a project called “Atrangi Re” with Akshay kumar and Sara ali khan.

Previous articleArun Vijay Replied To This Old Speech Of Suriya Now !! WATCH
Next articleArchana’s Daughter Uploaded An Emotional Post After Her Mother’s Eviction !!