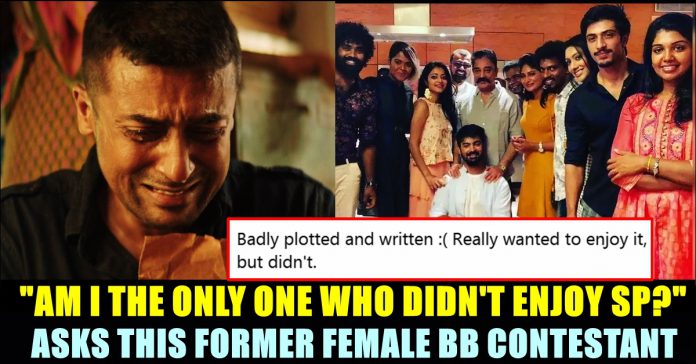 While the majority number of fans celebrating “Soorarai Pottru” for the way it is made, former Bigg Boss contestant Vaishnavi Prasad, posted a tweet saying that she enjoy the film and asked her followers whether she is the only one. Soorarai Pottru became the first Tamil film to be released in OTT platform by having a top-tier actor in the lead role.

The film’s plot revolves around Nedumaaran Rajangam’s constant struggles to initiate an Airline of his own to make simple people travel in it. He is being confronted by Paresh, an influential personality who is already running a successful airline. The film is considered as Suriya’s genuine blockbuster after 10 long years.

On seeing the film, Vaishnavi Prasad of Bigg Boss season 2 wrote “Am I the only person who didn’t enjoy Soorarai Pottru?”. Vaishnavi is a former radio jockey and journalist. Her Instagram bio informs that she is also an actor, model, Traveller, Food lover and Reality show survivor.

Am I the only person who didn't enjoy Soorarai Pottru?

Most of the people who commented on her post said that they didn’t like the film. “Badly plotted and written 🙁 Really wanted to enjoy it, but didn’t.” said a twitter user.

+100 and given all that hype, I thought it would be oralavaukku decent 🙁

The black and white characters ruined it for me. And the hype only made it worse.

Am not even going to watch

Popular movie reviewer “Blue Satta” Maaran, a popular Tamil movie reviewer branded the movie as a “mediocre” one and trolled the content by saying that some scene are baseless. “Lot of scenes doesn’t made sense in the film. For instance, the protagonist would beg people for money in Airport to catch a flight to meet his father who is in the deathbed. Do you people even know the salary of a pilot officer ?? Why you people are keeping such scenes just for the sake of it?” maaran asked the makers of “Soorarai Pottru” who also roasted the Abdul kalam scene that took place in the film.