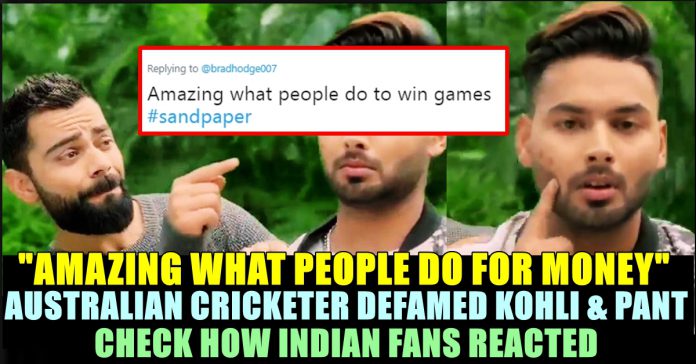 Brad Hodge was at the receiving end of some nasty comments on social media after he commented on a commercial video featuring Indian cricket team captain Virat Kohli and wicketkeeper Rishabh Pant.

The company released a new advertising campaign on Thursday that shows Virat Kohli and Rishabh Pant rapping about the benefits of the products. “Walking like a dude, feeling all cool, you’ve got the look, you’re gonna rule,” Kohli says at the start of the jingle. Virat Kohli took to Twitter to share the new ad with his fans. Obviously, the ad was instantly seen by his millions of followers but it was not liked by many.

Former Australian cricketer Brad Hodge was quick to comment on it but it didn’t go down too well with a lot of users on social media.

“Amazing what people do for money,” Hodge wrote on the video.

Amazing what people do for money

Check out his further tweets here :

As I said amazing what people do for money.

Amazing how brutal people are in response. So negative and glass half full. I was not speaking in a negative tone. I would do the same if asked and paid.

However he got trolled by the twitter users who did not convinced by his justifications.  Check out some of them here :

Virat Kohli is painting his house. Can you please come with Sandpaper. Would pay $5 an hour

Amazing how it bothers you so much 🤣🤣🤣

Amazing what people do to win games #sandpaper

Lol….his earning last yr itself was 23m..only cricketer in Forbes,total nearly 60million+.. tis could be just peanuts fr him

Lol….his earning last yr itself was 23m..only cricketer in Forbes,total nearly 60million+.. tis could be just peanuts fr him

Don’t be harsh on your fellow Aussie cricketers man! Especially on those who once termed India “third world” and now camp here for half the year.

What do you think on the comments made by Brad Hodge ?? Comment your views below !!

Previous articleStand Up Comedian Aravind SA’s Ultimate Revenge For “Lungi Dance” !! MUST WATCH !!
Next articleFor Giving Positive Reviews For Mr.Local, These Two Reviewers Got Thrashed !! Check Out Their Reactions !!

Shamlee, sister of former actress Shalini released one of the most romantic pictures of Ajith and Shalini to celebrate the couple's 23 years of...