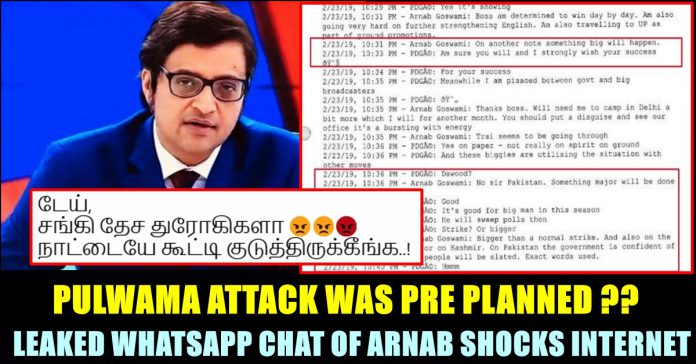 In the ongoing TRP scam case, a massive development has been progressed as a 500 page document of alleged chats of Republic TV’s Arnab Goswami got leaked on social media. The chat shows several information related to Goswami’s proximity with the Prime minister’s office and members of the ruling government. His efforts to manipulate TRPs in favour of him and getting help from the BJP government were also evident through the allegedly leaked chats.

Goswami and Dasgupta, ernest colleagues at the Times group, could be seen discussing politicians, journalists, news networks, and the TRP system. On February 14, 2019, one of the alleged chat shows, Goswami saying “This attack we have won like crazy”. The message was sent on the same day when 40 CRPF personnel had lost their lives after a convoy of vehicles carrying security personnel on the Jammu Srinagar national highway was attacked by a vehicle-borne suicide bomber at Lethopra in the Pulwama district, Jammu and Kashmir.

On seeing the transcript of the chat, many social media users believe that the Pulwama attack was well planned. The chat shows that Arnab was aware of the sensitive events and details including Balakot airstrikes, three days prior it took place.

“Arnab Goswami knew about the air strikes on Balakot, three days before they happened? Worse, he shared it on chat? Secrecy of military operations in India aren’t sacrosanct any more?” wrote Saikat Dutaa on seeing the transcript.

Arnab Goswami knew about the air strikes on Balakot, three days before they happened? Worse, he shared it on chat? Secrecy of military operations in India aren't sacrosanct any more? https://t.co/Q1KgDdTjLh

“This is what nationalism is supposed to be? “This attack we have won like crazy” 40 Jawans lost their lives.” wrote Pratik Sinha of Alt news.

This is what nationalism is supposed to be?

It Seems Pulwama Was A Well Planned Attack On Jawans..

This Is The Nationalism Of These bigots… pic.twitter.com/Y2VwkSeYLg

Dear @PMOIndia who leaked eyes only secret – Balakote strike against Pakistani to Goswami? Is this how you protect military operations & the national interest? pic.twitter.com/zq9PiyfPeF

WOW THIS IS BIG!
So Arnab had information on top Military secrets days before Balakot airstrike? 🔥😱#ArnabGoswami #ArnabGate pic.twitter.com/3sX7rOuaeA

Arnab knew about the Balakot Air Strikes three days before it happened!

He and his friend are chatting that this will "sweep the polls". Who told him?

This is a clear criminal offence under OFFICIAL SECRETS ACT

Arnab must be immediately ARRESTED for this & tried for TREASON.

Goswami’s conversation with the former BARC CEO Partho Dasgupta extends for several pages and the majority portion were leaked on social media. The chat between them, primarily shows, how Goswami asked for help to push the TRPs of his channel ahead of other news channels.

They also allegedly spoke very highly of Bollywood actress Kangana Ranaut for pulling TRP. “Kangana is a massive rating earner”, Goswami said in his chat and also joked about other journalists and discussed about crucial political developments. The chat of Arnab Goswami leaked on social media after Bombay high court adjourned the hearing in the TRP scam case till 29th of January. Arnab Goswami could not be arrested till the next hearing, said the Mumbai Police.