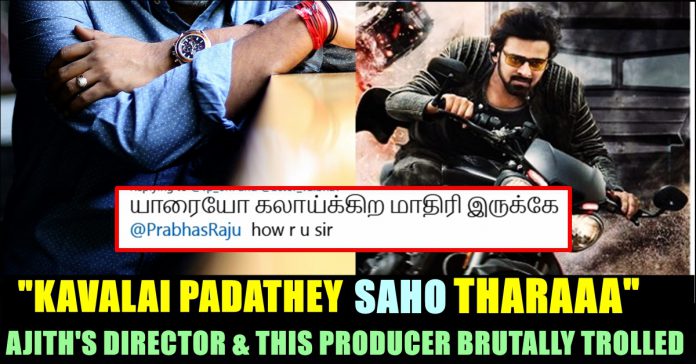 As Saaho is Prabhas’s next film after Baahubali 2, the expectations are astronomical, which will translate into magic at the ticket windows.

Along with Prabhas, Saaho, features Chunky Panday, Jackie Shroff, Neil Nitin Mukesh and Mandira Bedi in important roles. Directed by Sujeeth and produced by Vamsi Krishna Reddy, the film tells the story of an eminent power struggle between deadly gangs in the fictional city of Waaji, after an important leader dies.

As soon as the movie released, online reviews keeps on pouring in Internet. Blue Satta Maaran thrashed movie in his own way in his review. Prashanth, for his part trolled the movie while watching it.

Tollywood will know the real worth of this genius today !! Its never about the budget – it is always about the emotions !! #Saaho pic.twitter.com/Ax1QOaJ10G

After seeing all these reviews from the online reviewers, director Venkat Prabhu, who is known for directing films like Mankatha, Chennai 28, took a slight dig to support his dear friend and hero Vaibhav’s movie.

In his tweet Venkat Prabhu wrote “After seeing ALL da online reviews!! It looks like a #sixer weekend in Tamil Nadu!!! My #SAHOdharan
@actor_vaibhav ku vaazhthukal!!!”

After seeing ALL da online reviews!! It looks like a #sixer weekend in Tamil Nadu!!! My #SAHOdharan @actor_vaibhav ku vaazhthukal!!!

Check out some of the reactions for their tweets here :

Don’t be happy on others pain #Saaho #Prabhasfans @UV_Creations @prabhas

Prabhas and Shraddha Kapoor’s much-awaited Saaho hit the screens on Friday. The film has been making the right noise as it was Prabhas’s first film after the Baahubali saga, and the fact that it was made on a staggering budget of Rs 350 crore. Saaho was simultaneously filmed in Telugu, Tamil and Hindi.

Saaho has had a thunderous opening. The film has grossed Rs 104.8 crore and has a nett figure of around Rs 68.1 crore. It has beaten the record of Avengers Endgame (Rs 53 crore) as well as Thugs of Hindostan (Rs 52 crore).

Comment your views on these tweets of Vp of Ns !!

While the inaugural function of 44th Chess Olympiad is taking place in full swing with the presence of Tamil Chief minister MK Stalin, Prime...

H.Raja, National secretary of BJP party has came up with a tweet slamming Kamal Haasan for one of his statement regarding Thyagayyar during a...