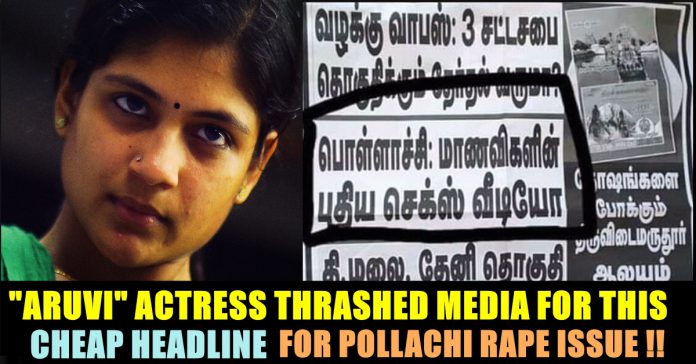 The woman did not name the man in her interview with Puthiya Thalaimurai, which the Tamil channel posted on its Twitter page. But she said he worked for a bus company and that he had admitted to smuggling rice and marijuana. Interrogating him could lead to more discoveries, she said. The woman, who has made a formal complaint, told the channel other victims had contacted her but were unwilling to go to the authorities.

Meanwhile actress Adithi Balan has came up with a video blaming police officers for supporting the criminals in this issue. Aditi Balan is a South Indian film actress known for her role as Aruvi for the film Aruvi. She started her career in acting in Tamil Movies after her degree course completion. She first featured in the movie Yennai Arindhaal featuring in the song “Mazai Vara poguthey” in which she comes as friend around Trisha. Her next film, Aruvi, was critically acclaimed and brought her much recognition and awards.

In the video she says that Police alerting the criminals once the videos got to their hands is the most disgusting thing one could ever witness. She also reasons that Police is the reason behind those hundreds of girls could not come forward. “Police officers are not providing safety to those girls who comes forward to complain” says Adithi in this video. “Even if I went to police station for solution, I never felt like getting one.” she added.

She also expressed her disappointment over media which published the Pollachi rape issue as sex scandal. She also labelled it as sick and wanted it to change.

.@maalaimalar do you guys have even an ounce of integrity? pic.twitter.com/Ep2sEvPz4n

Actress Parvati Nair also expressed her emotion through a tweet :

Heart is heavy. To believe that we are living among such cheap minds exploiting women, is really hard. Punish the human animals very hard. Let the victim girls & millions like them get justice. Girls, stay strong with kind-hearted men. #PollachiSexualAbuse #PollachiAssaultCase

We also wish the criminals to be punished at the earliest ?? What do you think on this comment your views !!