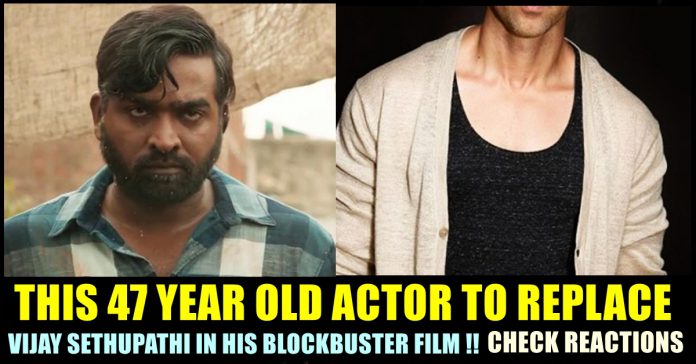 Production of Tamil blockbuster Vikram Vedha’s Hindi remake started in full swing on Friday with a huge reception from the fans of Bollywood cinema. Hrithik Roshan who is going to replace Vijay Sethupathi in the Hindi remake, came up with a video in his official Twitter handle, saying that he is walking in to a film set after 2 long years. On seeing the video, many wondered whether he is going to play the role of “Vedha” in the remake and wished the “Krishh” star to do well. Many of his fans believed that he justify the role which was played by Vijay Sethupathi in Tamil.

The official announcement on the Hindi remake of 2017 Tamil blockbuster “Vikram Vedha” has been announced by the makers of it by the end of 2020. The original starred Ranganathan Madhavan as righteous police officer and Vijay Gurunatha Sethupathi as a seasoned gangster. The remake is going be directed by the husband and wife duo Pushkar-Gayathri who wielded the megaphone for the Tamil original.

The cat and mouse crime thriller revolves around a good cop and a gangster who manages to escape every time the determined cop nabs him by narrating a story derived from his own life. The makers of the Tamil blockbuster said that they got the inspiration to write the story of “Vikram Vedha” while reading the ancient lore “Vikramathithyam-Vedhalam”. Now, as far as the lead characters are concerned, it has been confirmed that Bollywood Superstars Hrithik Roshan and Saif Ali Khan are going to reprise the roles of Vijay and Maddy respectively.

Earlier, it was reported that Aamir Khan is going to do one of the lead roles and backed out of the project recently due to unknown reasons. The film’s shooting started on Friday and the makers came up with an announcement about it in social media platforms. Meanwhile, Hrithik Roshan uploaded a video in his official Twitter handle which showed himself walking towards the film set. He added the BGM of original “Vikram Vedha” for the video, caption of which read “Hero walking on to set after 2 years. I am walking in front of him . Wait for it.”

Hero walking on to set after 2 years. I am walking in front of him .
Wait for it. #vikramvedha #teamisasliheroes

In the video, Hrithik could be seen donning a thick beard with his well built body. In contrast, Vijay, in the Tamil version, was having grey beard with his tummy out to play gangster “Vedha”. We have to wait to witness how Hrithik is going to pull off the role. Many of his fans commented wishing the “best” for Hrithik and believed that he would nail it.

🔥🔥🔥🔥🔥🔥🔥🔥 i can spend my whole life looking at you @iHrithik ❤️#VikramVedha https://t.co/xkqFI6iDgo

Previous articleAnupama Replied To Fan Who Asked Her To Pose In “Bikini”!! WATCH
Next articleMumbai Indians Wished CSK For Winning Trophy !! Check How Chennai Fans Reacted

Oscar winning A.R Rahman turned a story writer and producer through "99 songs", a film which was directed by a debutant named Vishwesh Krishnamoorthy....

Varun Chakravarty Requests For A Meeting With Vijay To This Actor !! WATCH

Varun Chakravarty got a call from team India to represent the national team in the upcoming T20 series with team Australia. This news has...