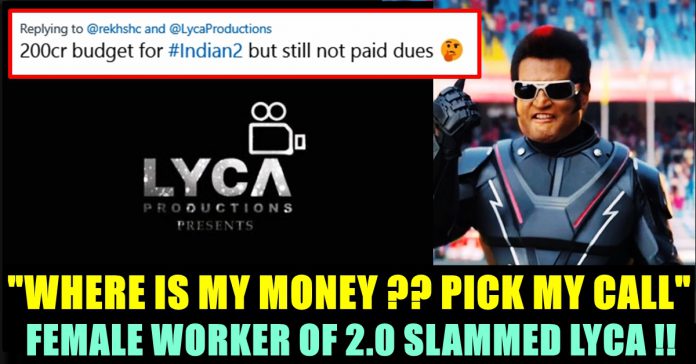 A Rajinikanth film is nothing but a celebrations for his ardent fans, who once again expressed their love for the superstar by gathering in huge numbers to watch his highly expensive film “2.0”. The film was directed by Shankar and was bankrolled by Lyca productions. With a massive budget of around Rs 600 crore, superstar Rajinikanth and Akshay Kumar-starrer 2.0 is considered as one of the biggest blockbusters of 2018. Now to our shock, a crew member of the movie who did subtitling for the film in two languages has alleged that Lyca failed to provide her pay for the work she done. Rekhs whose bio says that she is working on the subtitles since Vinnai Thaandi Varuvaya to an upcoming film Naragasooran, slammed Lyca by tagging their official twitter account. He tweet posts read as “can @LycaProductions pls let me know when my team & i will be paid for #2pointO we handed over all reels, both langs in good faith, trusting u won’t let us dwn. Sadly my last resort but i strongly feel cast & crew shd b paid. i cn u/s delay but not this silence 2my calls/mail 😶”

can @LycaProductions pls let me know when my team & i will be paid for #2pointO we handed over all reels, both langs in good faith, trusting u won’t let us dwn. Sadly my last resort but i strongly feel cast & crew shd b paid. i cn u/s delay but not this silence 2my calls/mail 😶

This tweet grabbed the attention of the twitter users who started retweeting it to make aware of the  situation. Check out some their reactions here :

Such a shame ! And still they @LycaProductions go for big once keeping there heads up!

200cr budget for #Indian2 but still not paid dues 🤔

Produced by Lyca, the film has music composed by AR Rahman and sound engineered by Resul Pookutty. The cinematography for the film completely shot in 3D by Nirav Shah. Earlier a foreign Magician alleged that he is not getting his pay from Thenandal films for the work he done for the movie “Mersal”. This Magician Who Worked In “Mersal” Hiring Lawyer In Chennai To Get Paid !! SHOCKING !!

What do you think on this allegation against Lyca ?? Comment your views below !!

“Even After The Film Was Ended, No One Got Up From Their Seat” Tweeted Sky Cinemas !! Comments Are Just Hilarious !!

BREAKING : Rajinikanth’s Instant Reaction Captured At Airport After He Heard About The NEET Student Death !!

A 17-year-old girl who was found dead at her home in Tamil Nadu’s Villupuram district on Monday is suspected to have killed herself by...

A post on Reddit which narrates the ordeal an 18 year old girl went through while getting tattooed by an individual named Sujeesh has...

Forty two year old pan Indian actor Siddharth replied to an online fan who trolled him based on his age during a discussion on...