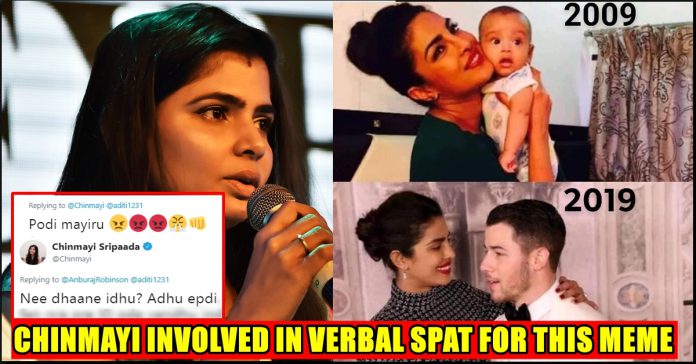 If the ‘Bird Box Challenge’ on social media was not enough, a new trend, #10YearChallenge, has caught everyone’s attention. From celebrities, brands to people, many are posting their pictures of 2009 and 2019 showcasing the changes they have gone through in the past 10 years. Twitter, Instagram and Facebook are being flooded with posts with two pictures put side by side along with the hashtag #10YearChallenge.

From Hollywood celebrities like Jessica Bell to Tamil Tv actor Rio, many popular faces have taken part in the challenge.

Meanwhile a meme on Priyanka Chopra and Nick Jonas 10 years challenge has been surfaced on Internet. The meme showed Priyanka Chopra holding a child in 2009 and marrying with Nick in 2019. 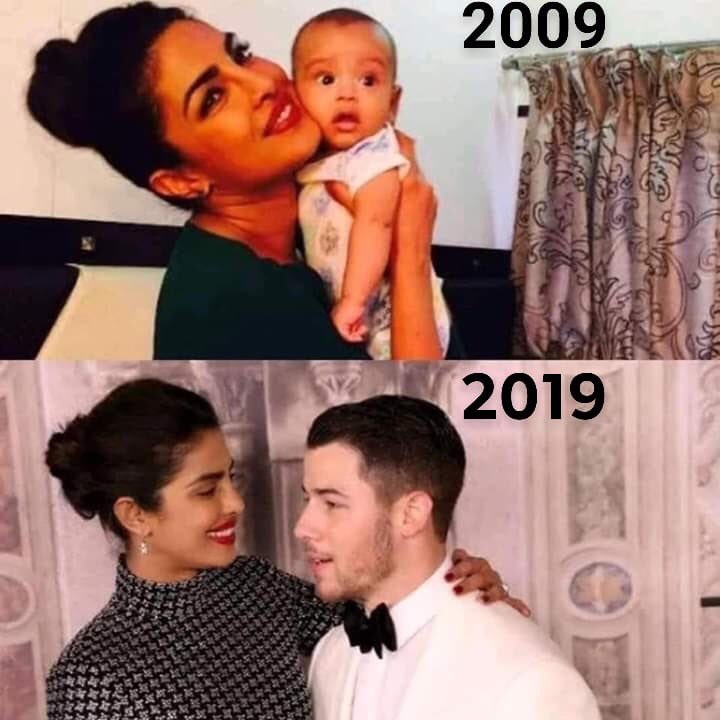 Singer Chinmayi who is known for her voice in Kollywood industry got so offended by this meme it seems. Chinmayi is one of the familiar face of South India for the initiation of Me Too movement which made a revolution on pointing out the men who harassed women in various industries.

Sharing this meme Chinmayi in her official twitter account wrote “Anyone see how mean this meme is? This is a country where men marry women 25 years their junior, elsewhere in the world 60 year olds marry children and no one bats an eyelid. A woman marries someone younger and it is a meme in a 10 year challenge. Casual sexism ain’t cool.”

Anyone see how mean this meme is?
This is a country where men marry women 25 years their junior, elsewhere in the world 60 year olds marry children and no one bats an eyelid. A woman marries someone younger and it is a meme in a 10 year challenge.

Check out her conversation with her followers regarding this meme :

You underestimate a lot of things. Time will tell

An image like this was circulated earlier and it was a gang rape joke that many laughed at. Sense of humour and sexism have gone hand in hand and the intelligent can come up with better stuff pic.twitter.com/QhE5khkBxN

Memes are memes. Now a days people do make fun of everyone mam, its not about any particular gender.

Chinmayi was one of the most active voices in the South film industry to show their support towards the MeToo movement. She called out lyricist Vairamuthu for sexually harassing her when the two were in Switzerland for a concert named, Veezhamattom, in 2005. Vairamuthu had then released a statement denying all allegations, Chinmayi had then reacted by calling him a liar.

What do you think on her stand on this meme ?? Comment your views below !!