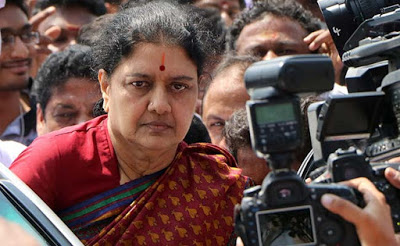 It came as a shocker to VK Sasikala when the court convicted her
for four years in the disproportionate case and she is now serving her four
year sentence in Parappana Agrahara Central Jail in Bengaluru. After she
surrendered, there are loads of news circling around,about her jail life and in
fact some even say that if the conviction had happened post her chief minister
swearing in ceremony, the jail life would have been different. Here is a
collection of news items we present you from various sources on the internet:

1.     Mrs. Sasikala apparently spent her cell
with Ilavarasi and had a sleepless night throughout on  cold, hard floor
in a cold hard  10×8 prison cell without a cot, reports NDTV.
2.
AIADMK’s
Karnataka Unit Secretary V Pughazhendhi told IANS that Sasikala woke up at 5am
on Thursday, did yoga and walked in the barracks for a while. She also
reportedly read two Tamil newspapers.
3.
It
seems that Sasikala performed yoga and walked in the barracks for a while after
waking up at 5 AM followed by reading two newspapers says, AIADMK’s Karnataka
Unit Secretary V Pughazhendhi told IANS
4.
As
per TOI, Making candles or agarbathis at Rs 50 per day as wage is the job
sasikala has to do.
5.
BangaloreMirror reported that Cyanide Mallika, a serial killer who is sharing a cell
next to Sasikala and Ilavarasi tried to initiate a conversation with sasikala
but she refused to reply. But later, Sasikala reportedly smiled when mallika
attempted to make conversation again
6.     Telegraph reports that, Sasikala is
prisoner number 9234, while sister-in-law Ilavarasi and nephew Sudhakaran have
been allotted prisoner numbers 9235 and 9236 respectively.
7.
Sasikala
was denied special privileges like home-cooked food, private television,
non-vegetarian food twice a week and a special room for prayers and yoga.She
has been given no luxuries besides a fan, a blanket and a pillow. All the three
will be under B-class prisoners after the judge rejected Sasikala’s plea
seeking Class-1 facilities.
8.
Sasikala
has already completed 35 days in prison for the DA case and she may not have to
server her entire four-year imprisonment, reports New Indian Express which also
adds on that because of remission depending on prison authorities, 451 days can
be reduced from her prison term.
9.
According
to TOI, Vivek Jayaraman, Ilavarasi’s son was also when sasikala met with
her team of lawyers while the newspaper also reports that Sasikala’s husband
Natarajan is staying at a hotel in Bengaluru.