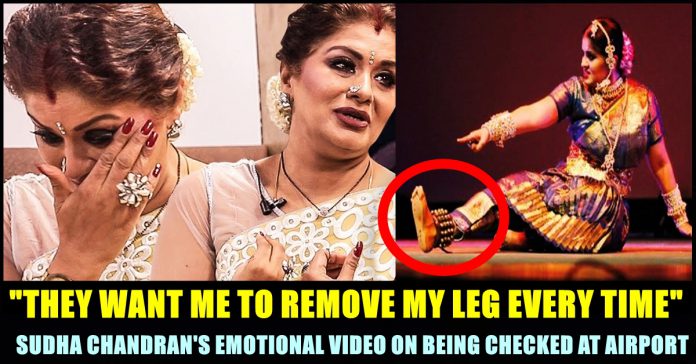 Senior actress Sudha Chandran who is known for acting in films across the country, recently released an emotional video in her official Instagram space, complaining against the CISF officials who demand her to remove her prosthetic limb every time she visit the airport to go somewhere personally or professionally. The 55 year old actress who is a Bharatanatyam dancer, hurt her leg in the year 1981 near Trichy while returning to Chennai. Her leg became gangrenous and her parents opted to have it amputated.

Now, the actress expressed her dejection over how she is being asked to remove her prosthetic limb every time she visits the airport. The Central Industrial Security force has issued an apology after the actress released a video addressing Prime Minister Narendra Modi in her video.

On Thursday, Sudha came up with a video in her Instagram space saying that she is grilled by the security agencies every time she visits for her professional assignments. Though the actress requested the airport authorities to conduct an ETD (explosive trace detector), they demand the removal of her artificial limb every time.

In her video, she asked PM Modi to issue a card to people with prosthetic limbs just like how senior citizens are given. “Good evening, this is a very personal note that I wanted to tell our Prime Minister Narendra Modi ji, this is an appeal to the central government, I am Sudha Chandran, an actress and dancer by profession who has danced with an artificial limb and created history and made my country proud of me”, Sudhaar Chandran said in her post.

“But every time that I go on my professional visits, each time, I am stopped at the airport and when I request them to have an ETD for my artificial limb, they still want me to remove my artificial limb and show it to them. Is this humanly possible Modi ji? Is this what our country is talking about?Is this the respect a woman gives to another woman in the country?” She questioned.

“Totally hurt.. Each time going through this grill is very very hurting.. Hope my message reaches the state and central government authorities… And expecting a prompt action” Caption of her post read.

“We are extremely sorry for the inconvenience caused to Ms. Sudhaa Chandran. As per protocol, prosthetics are to be removed for security checks only under exceptional circumstances” Official Twitter handle of CISF said in a statement.

“We will examine why the lady personnel concerned requested Ms. Sudhaa Chandran to remove the prosthetics. We assure Ms.Sudhaa Chandran that all our personnel will be sensitised again on the protocols so that no inconvenience is caused to travelling passengers” they added in their statement.

We will examine why the lady personnel concerned requested Ms. Sudhaa Chandran to remove the prosthetics. We assure Ms.Sudhaa Chandran that all our personnel will be sensitised again on the protocols so that no inconvenience is caused to travelling passengers. 2/2