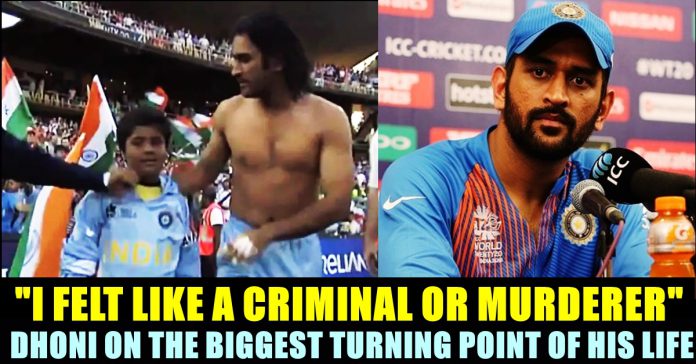 An old video of former Indian captain Mahendra Singh Dhoni which shot during the promotion of his biography film “MS Dhoni : The Untold Story” which had late actor Sushant Singh Rajput in the lead, has surfaced in social media now. As the skipper of Chennai Super Kings announced his retirement from all forms International of cricket on 15th of August, videos of his old interviews and iconic innings are constantly doing rounds in the social media platforms. In this video which was shot in the year 2016, Dhoni can be seen revealing about the biggest turning point of his life.

Former Indian Team Captain Mahendra Singh Dhoni, who hasn’t played a single match since the semi finals of World cup tournament uploaded a post in his official Instagram account saying “Thanks. Thanks a lot for ur love and support throughout.from 1929 hrs consider me as Retired” on Independence day.

Dhoni, the cricketer who has a huge fan base in world made his last appearance in the semi finals of 2019 world cup tournament. His run out in the semi-finals match against Black caps shattered the dreams of Indian fans. It devastated the fans in the stadium as there was a pin drop silence in Manchester crowd. The two day international world cup semi finals match went in favours of the black caps due to the top order collapse for the first time in the tournament.

Now, in this 4 years old video, while talking about the biggest turning point of his life, Dhoni recollects the world cup defeat in the year 2007. The 2007 ICC Cricket World Cup was the 9th edition of the Cricket World Cup tournament that took place in the West Indies. A defeat to Sri Lanka in the final group match was the nail in the coffin and the Indian cricket team were eliminated from the 2007 World Cup. Australia were crowned the Champions after their dominating display throughout the tournament.

Talking about what he went through after the defeat Dhoni said that the team players were treated like terrorists or murderers. The cricketer shared about it as it didn’t take place in the movie and said that it had a very deep effect on him. The cricketer said that there was a lot of Media and everything when the Indian team landed back at Delhi from West Indies after getting knocked out by Sri Lanka.

“The hype was not really right for us at that point of time” said Dhoni who added that they(players) were trying to avoid the media as they couldn’t go and say anything to them. “We were more depressed about it than anybody else” he said.

Dhoni who explained that winning and losing is a part of a sport, said that sports personalities do have emotions. But he believed in keeping his emotions within himself instead of crying in front of media or public. “I am a strong man and I can deal with everything” he said.

Further Dhoni said how media people treated the players after getting himself. “I was sitting near Viru pa in a police van as we had no way out. We were travelling in a decent speed, 60 or 70. And there were media cars around us with their cameras and big lights on top” the cricketer said who went to explain how it felt for him.

“It felt as if we have committed some kind of a big crime, maybe like a murderer or terrorist or something. We were actually chased by them.” said Dhoni. He also said that the team members stayed at a police station for 15 plus minutes before leaving. “That actually had a big impact when it comes to me and again you have to go through everything in life.” said Dhoni who talked about channelizing the emotion instead of complaining about it in public. It is notable that the cricketer won the world cup for India as a captain in the same year in the first ever T20 world cup tournament. “To some extent it was a big turning point in my life” Dhoni said.