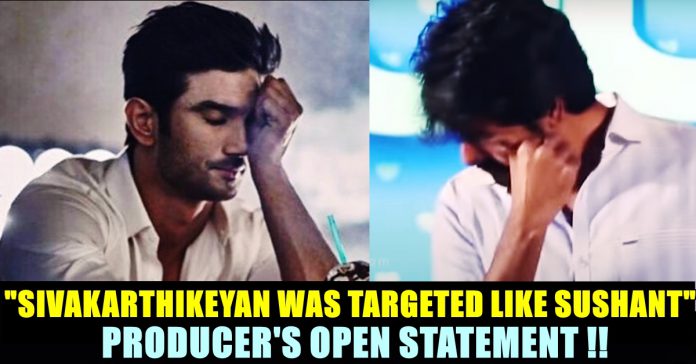 The demise of Sushant Singh Rajput which took place on 14th of June, is still making waves in the film industries of India. People concluded that the young actor killed himself due to the Nepotism culture that exists in Bollywood, despite it is evident that Sushant had a life beyond cinema and his thoughts are very much progressive.

When Kangana Ranaut said that Sushant’s hard work went unnoticed due to Nepotism in Bollywood, Vivek Oberoi stated that Sushant went through what he experienced years back. Veteran actor Prakash Raj also said that he survived Nepotism. While many people posted videos and tweets blaming the existence of nepotism in Bollywood for the loss of the young , Rohini Iyer, a popular film journalist and a closest friend of him, said that he never cared about Cinema industry at all.

Now, Producer Ravinder Chandrasekar who became familiar among Tamil internet audience for his intervene in Vanitha Vijayakumar- Peter Paul marriage issue, has said that Sivakarthikeyan is the one who was targeted for his growth in Kollywood like Sushant Singh Rajput. “According to me, the one whose growth was targeted in Tamil film industry was Sivakarthikeyan’s. Three, Four years before Sivakarthikeyan would have faced a lot of trauma everytime he tried to prove himself. He faced problems in either way. That would look like a financial barrier. But that was what cornered Sushant according to me” Ravinder said in the interaction. “It happened to Sivakarthikeyan sir as far as I know. It didn’t happen to any other actor” he added.

“His growth was humongous. The way he grew as a Superhero from being a TV anchor in a short span of time made a very big impact in the industry. The magic was created in a very fast way. I realized that it was the biggest nepotism that ever happened. The torture he went through was the biggest nepotism. People found problem in him buying a new car for himself, they made a problem if he goes somewhere. At one point he even reacted” said Ravinder mentioning Siva getting emotional in Remo function.

“He himself asked why they are harassing him at that time. That is the place he reflected. As he faced such situations while working in TV itself, he handled it in a smart way and continued to grow” Ravinder said in the interview. Ravinder also mentioned that Vijay Sethupathi also faced such harassments. “Even if Vijay Sethupathi tries to promote a mobile app, a large group will emerge to destroy his reputation” Ravinder said.

The film producer who made “Natpuna Enna nu Theriyuma” with Kavi earlier has launched a film named as “Murungakka Chips” in which Shanthanu and Athulyaa are going to play the lead roles.

Comment your views on these statements of Ravinder Chandrasekar on Nepotism in Kollywood !!

Previous article“GST For Exam Fees Too ?” Tamil Actress Got Upset !!
Next articleMan Threatened To Rape Khushbu Just Because She Is A Muslim !!