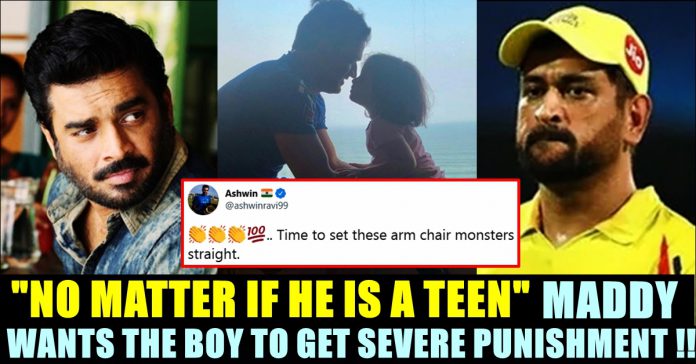 Gujarat Police detailed a 16 year old boy for allegedly making rapie threats to the daughter of former Indian captain Mahendra Singh Dhoni in the social media posts of his wife Sakshi Dhoni. The accused who is a class 12 student was arrested from Mundra in Gujarat on Sunday. He was picked up by the local police after a tip off from the Ranchi police which had registered a case regarding the issue last week. The accused confessed to having made the threatening message on Instagram, according to police.

Along with the enraged Internet users who follow cricket, public people and cinema celebrities demanded immediate arrest against the guy whose insta handle name is “Mr. Vijay 47” for the comments he wrote in the social media posts of Sakshi Dhoni. After Chennai Super Kings lost the match against Kolkata Knight riders, along with other fans who abused Dhoni and Jadhav, “Mr. Vijay 47” made a rape threat against the 6 year old daughter of the world cup winning captain. When this news made it to the headlines, fans got deeply hurt and demanded arrest against the social media user who photos and screenshots were doing rounds in the internet.

Such sick bastards.. Mr.vijay_47. Should be found and get a mass beating and be put behind bars.. Fucking uncultured asshole.

Pardon my language but how dare he.. #Dhoni #CSK #CSKvsKKR #IPL2020 pic.twitter.com/HcexhpYxNy

The depraved b*****d should be locked up for life for thinking and saying such evil things for a child. Just for a frigging IPL he has targeted a kid. We all stand by legend @msdhoni and #Ziva pic.twitter.com/VSp373o226

Saurabh Singh, Superintendent of Police confirmed that the teen was picked up for questioning where he confessed committing the crime. “The class 12 student from Namna Kapaya village was detained for questioning in connection with a disgusting threat message that was posted on the Instagram account of Dhoni’s wife Sakshi Dhoni a few days back” said Saurabh Singh to the media.

The accused belongs to Madra in Kutch district of Gujarat. Ranchi police who registered a case in the matter, shared the lead to the Gujarat Police who picked up the teenaer for the questioning. After his confessions, he will be taken into the custody by the Ranchi police.

“We detained him for questioning after Ranchi police informed us that the accused hails from Mundra in Kutch district. We have confirmed that the boy is the same who had posted the message. He will be handed over to Ranchi police as the FIR was lodged in that city” Saurabh Singh said. Legal actions as per the Juvenile Justice act is expected to be taken against the accused.

On reading this news, actor Madhavan who is known for the films he acted across the country, posted a tweet lauding the police officials. He said that these culprits who thinks that they can write whatever they want in social media should be severely punished, even if they are teens. “Teenager Detained For Issuing Threats Against MS Dhoni’s Daughter: Police Great job .. time to clamp down and put the fear of law and god on these faceless monsters who think they can do and say what they want on the internet. Even if they are teens.” Maddy’s tweet read.

Teenager Detained For Issuing Threats Against MS Dhoni's Daughter: Police Great job .. time to clamp down and put the fear of law and god on these faceless monsters who think they can do and say what they want on the internet. Even if they are teens.😡😡 https://t.co/mu9jR5tnQt

Replying to this tweet, Ravichandran Ashwin who played under Dhoni’s captaincy in several occasions, wrote “Time to set these armchair monsters straight.”

After CSK lost the match against KKR due to middle order collapse, fans of the CSK team were trolling Kedar Jadhav based on his performance. Some who didn’t like the way Dhoni batted, made fun of him as well. But some miscreants, posted comments in social media abusing the family of the cricketers. Irked with their online activity, many fans expressed their anger in tweet form. The disturbing comments were mostly written in Hindi language and were captured screenshot by the fans who couldn’t tolerate seeing them.

Paari Saalan , a social media influencer who is prominently known for his controversial speeches in most of the leading Youtube Channels. He will...

Actor Vimal's speech about his failures in the launch of his upcoming web series "Vilangu" has won the hearts of online users. The actor...

On Monday, Twitter India temporarily blocked some of the twitter accounts which belonged to politicians, activists who were uploading tweets against the BJP party...