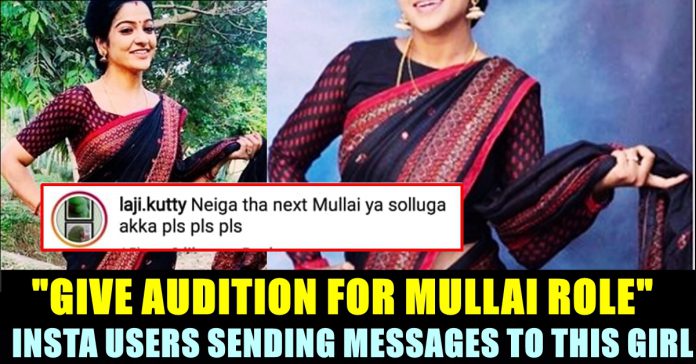 Since the demise of Chithra, speculations on her replacement for “Pandiyan Stores” serial is doing rounds in social media. Initially, a report surfaced saying that actress Sharanya Turadi, a dear friend of Chithra is going to replace her in the serial. However, the “Nenjam Marappathillai” actress uploaded a story in her official Instagram account saying that she is not going to play the role and the role played by Chithra is irreplaceable.

“There’s a news going around that I am replacing Chithra as Mullai in Pandiyan stores. That it not true. I don’t believe in replacing Mullai. She earned her recognition as Mullai with her impeccable performance which would be remembered forever. I respect that and I would rather let it be” read the story of Sharanya.

A report also says that Bharatha naidu of Zee Tamil “Semburuthi” serial has replaced Chithra. Now, a look alike of Chithra named Keerthana Dhinakar has been recreating the appearance of “Mullai” character and is gaining the attention of social media users.

Keerthana Dhinakar whose bio says that she is an anchor of Vasanth TV and a contestant of dance Jodi dance season 2 of Zee Tamil, has been recreating the appearance of Mullai from “Pandiyan Stores”. Through her recent post, she said that her friends has been suggesting her to attend the audition to replace “Mullai”.

In her most recent post, Keerthana had said that many people compared her looks with Chithra all these days. “But to be honest, I was never happy to receive the comment as I felt we don’t have any resemblance and I wanted to be original.” she said through her post. However, the actress says that she feels happy now when people make the same comment. “I feel good for looking similar because I can make someone happy 😃” she said.

“From the moment she passes away, I’m getting messages and calls from my friends and known circle saying that now you try to contact the team and give auditions…. definitely they will take you. First time when I heard it, I thought people are making fun of me. I laughed and just ignored. But till now, I keep getting the same messages” she said through her post.

Check out some of the reactions for these posts of Keerthana below :

However, some people think that she doesn’t resemble Chithra at all and expressing their opinions in the comment section. What do you think ? Does she look like Mullai ?? Comment your views !!

Previous articlePrithvi Shaw Is Trending In Internet After Getting Out For A Duck !!
Next article“Neeya Naana Is A Scripted Show” – A Separate Set Of People After Watching The Latest Episode

After finding the kitchen and storage units unhygienic, officials of food safety department sent stop-sale notice to three restaurants which are located at the...

"Premam" director Alhone Puthren is pretty much active in social media platforms ever since the lockdown was implemented. He recently conducted a chat session...