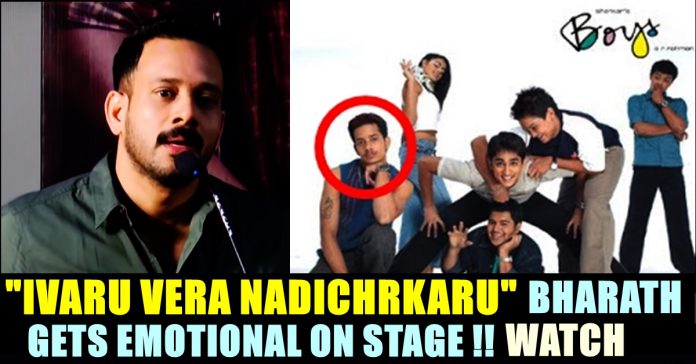 Actor Bharath who rose to fame among tamil audience for acting in films such as “Kaadhal” and “Pattiyal” is all set to make his come back in bollywood industry. Surprisingly, the actor who is desperate for a hit in Tamil cinema, is going to share screen space with the Superstar of Bollywood Cinema, Salman Khan. Meanwhile the recent release of the actor,”Kaalidas” is receiving extremely positive reviews which let the makers of the movie to conduct a success meet.

In the success meet, Bharath got emotional and expressed his emotions for the first time after a long time. Unfortunately Bharath’s both the releases of this year failed to make an impact in box office. But the positive word of mouth for “Kaalidas” and footfalls made the actor extremely happy which is evident through the success meet speech.

“I didn’t plan for this speech as it would look like I am trying to create sympathy. I am going to let my heart out” says the actor while starting his speech. He mentioned that he is entering the 18th year of his film career in 2020. “I always tried to give good films but my decision goes wrong sometimes. It will always happens to many heroes” says Bharath who added that his film Kadugu and Simba attracted the critics but failed to make an impact among audience.

“We started the production of the film in 2017 by believing that we are going to make a good film. After finishing the production, we struggled for 7 to 8 months to release it with appropriate distributors. Many people in the industry watched the film before its release. They said to my director that the film was nice but questioned about by market value” said an emotional Bharath.

“They asked my director how can they make business by having me in the lead. I have heard it myself. But what can I do ?? I don’t know anything other than cinema. I didn’t study much as well. I came to cinema when I was sixteen and I still believe it is my future” Bharath said.

“I have made many phone calls. All of them asked me to wait but none of them called. It gave a severe depression to me and to the director. But after the release, when press gave a positive response, I became extremely happy as their writing reached larger audience.” said the actor who expressed his gratitude by greeting them from the center of the stage.

Bharath made his acting debut in the 2003 Tamil film Boys directed by S. Shankar, in which he played the guitarist of a boy band. He played his first main lead role in Balaji Sakthivel’s Tamil romantic-drama film Kaadhal that featured him as a poor mechanic who falls in love and elopes with a wealthy twelfth-standard student.

What do you think on this speech of the 36 year old actor ?? Comment your views !!

Previous articleRajinikanth To Act In A “Transgender” Role ?? WATCH !!
Next articlePallavi Released Video To Clear The Air !!

Dr. Sharmika Reacted To The Legal Notice Sent To Her??

After the news about a legal notice being sent to Doctor Sharmika for spreading baseless information surfaced in internet, she came up with a...

The two catches dropped by Kohli costed the match for Royal Challengers Bangalore. The Indian captain himself accepted that he should have led from...

When Superstar Rajinikanth Got Upset With His Director’s Answer !!WATCH