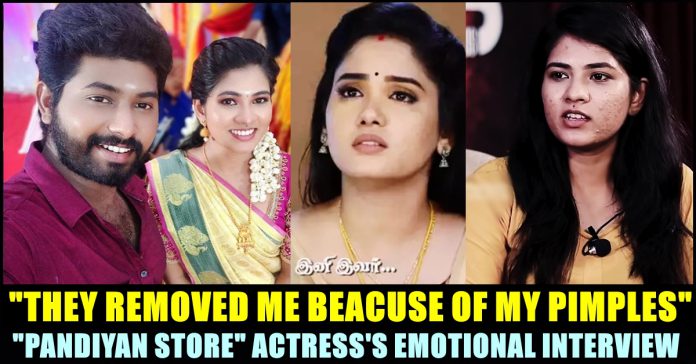 “They Removed Me Because Of My Pimples” – Pandiyan Stores Aishwarya Opened

Video Jockey Deepika who is popularly known as Aishwarya of “Pandiyan Stores” serial that is being telecasted in Vijay Television, appeared in an interview with a popular youtube channel and opened about the main reason behind her sudden replacement in the serial. It was recently announced that Aishwarya who was playing pair for Kannan, youngest brother in the serial, is going to be replaced. Sai Gayathri who is known for appearing in the serials of Vijay Television such as “Kana Kaanum Kalangal” is going to play the role.

“So makkale YES , From Today onwards you can watch me on #PANDIANSTORES as #AISHWARYA .
So all I need is ur LOVE & SUPPORTS 🙏🏻 Hope I will give justification to Dis #Role and Entertain you all .❤️ WISH ME ,BLESS ME😇” Sai Gayathri said in her post to update about the same.

Now, in a popular youtube channel, Deepika opened about the main reason behind the replacement. She said that the acnes in her face which lasted several months made the makers of the serial to go with Sai Gayathri. “I am going through an acne treatment. Initially, I thought it is an allergy that caused by my make up. I was trying to cure it step by step but couldn’t cure it completely within the time span I was provided by the serial makers” Deepika said in the interview.

“Since June I am suffering. They (makers of my serial) encouraged me to perform well and it wouldn’t be a concern. But it started increasing due to applying make in a constant manner for shoot. I could’t cure it within the time they gave and I too though that I need a break” said Deepika in the interaction.

Deepika said that the crew kept asking her about when she will get cured completely. She who thought that she could cure it with treatments, realized about the probable delay and talked about it to the makers. “They gave me the space but I couldn’t cure my condition on time” Deepika said in the interview.

“This is not my mistake. If I performed bad or failed to give proper inputs or made delays or disrespected them, it could me considered as my fault. Getting affected by acne is not my mistake at all” said Deepika and expressed her emotions throughout the interview.

Previous articleLosliya’s Recent Dance Video Gets Trolled!! Her Fans Came Into Rescue!!
Next articleInternet Thrashed “Dikkilona” for This One Dialogue!!

This Star Player Of Indian Team Complained About Kohli’s Captaincy ??

A number of shocking reports surfaced saying that India's senior player Ravichandran Ashwin complained to the Board of control for cricket in India complained...

A.R.Rahman, who attended the event day before yesterday, said that “Ilayaraja is my headmaster. I have learnt a lot from him. When I look at...