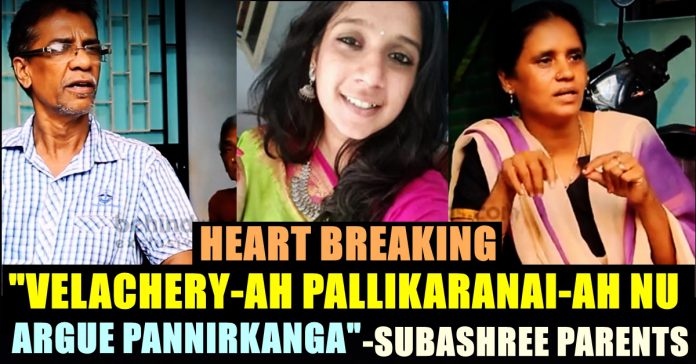 Now the video interview of her parents expressed their sorrowful thoughts after the heart wrenching incident. “My daughter has not died in accident at all. “The Lorry driver and my daughter could have gone in their respective way if there was no banner. She died only because of the banner. It is not an accident at all” said the father who says that the Police argued with his injured daughter about which area police station the accident belongs to.

Manoj, the lorry driver was immediately arrested for rash driving and causing death due to negligence. The officials of Chennai corporation lodged complaint against the political funcionary after which a senior police official said that action would be taken against them.

“The one who kept the banner has not come front to console us till instead they are making irrelevant statements which hurts us even more” said the mother. “I don’t want this to happen to another family” Father of Subashree kept insisting throughout the interview.

“For 20 long minutes they argued about which police station the accident belongs is what I heard from the people who were there.”said the mother. “They argued whether it comes under Pallikaranai or Velacherry. My daughter kept bleeding for that 30 long minutes. Ambulance didn’t come at first but public came front to admit her in the hospital” father fumed.

A statement made by Nelson Dilipkumar before the release of "Beast" about entering cinema only to earn money, didn't go well with a number...

Viral Video Of Mayor Priya Being Mentioned As “Kuzhanthai” !!

Video of new Chennai's Mayor Priya facing the press for one of the first times is going viral in social media as someone, presumably...