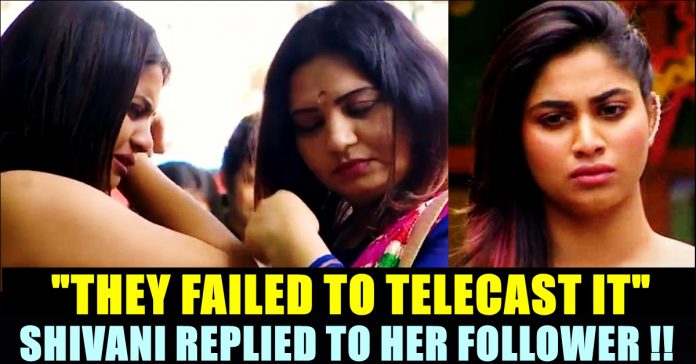 “They Failed To Telecast It” Shivani Replied To Her Follower !!

For the first time after coming out of Bigg Boss house, Shivani has conducted a chat session with her Instagram followers. She answered to many questions asked by her fans and while replying to one of her followers who asked why she didn’t express herself much while being inside the Bigg Boss house, the “Pagal Nilavu” actress said that she talked enough inside the house but the show makers failed to telecast them. Shivani also replied to a follower who asked about her mother and cracked a “Mokka Joke” for her followers as well.

Shivani participated in the Bigg Boss house as one of the 16 contestants and became the last contestant to get evicted before the finale week. The actress who got nominated by a number of times, got saved by her fans and followers. She is currently enjoying 25 lakh followers in Instagram and is uploading the pictures of her to engage them.

Shivani Narayanan, the young Internet sensation who made youngsters go gaga through her ultra glamorous photoshoots in Instagram, entered Bigg Boss house as a participant. Since her entry, the TV actress didn’t involve in any kind of activities and restrained herself from arguing with her co-contestants during tasks. However, she spent most of her time in the house with Balaji Murugadoss, a co-contestant of her who is also a model. Their combination attracted a number of viewers who started creating Instagram accounts dedicated to the duo.

On Monday, the young actress conducted an interaction session with her followers. On seeing her answering her followers in an enthusiastic way, a follower asked why she didn’t talk much inside the house. “Ipo nalla pesringa, bb la en neraya pesala” the follower asked. Replying to him, Shivani said “You are asking it in a cute way, I talked a lot but they didn’t telecast it”

Another follower said that he is missing her “Mokka Jokes” which she used to crack while being inside the Bigg Boss house. Shivani, to make his follower happy, immediately cracked a “Mokka” Joke.

The TV actress also said that she is indeed missing the voice of Bigg Boss and added that it is “Okay” to be without his voice.

Shivani grabbed the headlines when her mother made her entry inside the house during the “Freeze” task. Akila Narayanan, severely condemned her daughter for flirting with Balaji Murugadoss without playing the game of her own. The episode grabbed special attention from the viewers of the cash-rich show and reactions poured from all the directions of social media platforms at that time.

However, now, after coming out of the house, Shivani has uploaded a picture with her mother saying that she is her everything. “My Everything ❤️” wrote Shivani and tagged the Instagram account of her daughter.

The Chennai based model who started establishing her career in entertainment industry since her childhood days, initially participated in beauty contests and fashion shows at state level. She debuted in Television through Saravanan Meenatchi in a minor role. After appearing in few more serials as lead, Shivani participated in Vijay Tv’s popular dance reality show “Jodi Fun Unlimited” in which she paired with her co-artist Mohammad Azeem

Young and emerging filmmaker Karthik Naren's tweet about his come back through the upcoming anthology film "Navarasa" had garnered huge attention among the fans...

A video showing senior music director and filmmaker Gangai Amaren abusing an anchor for questioning about the foreword written by his brother Ilayaraja for...