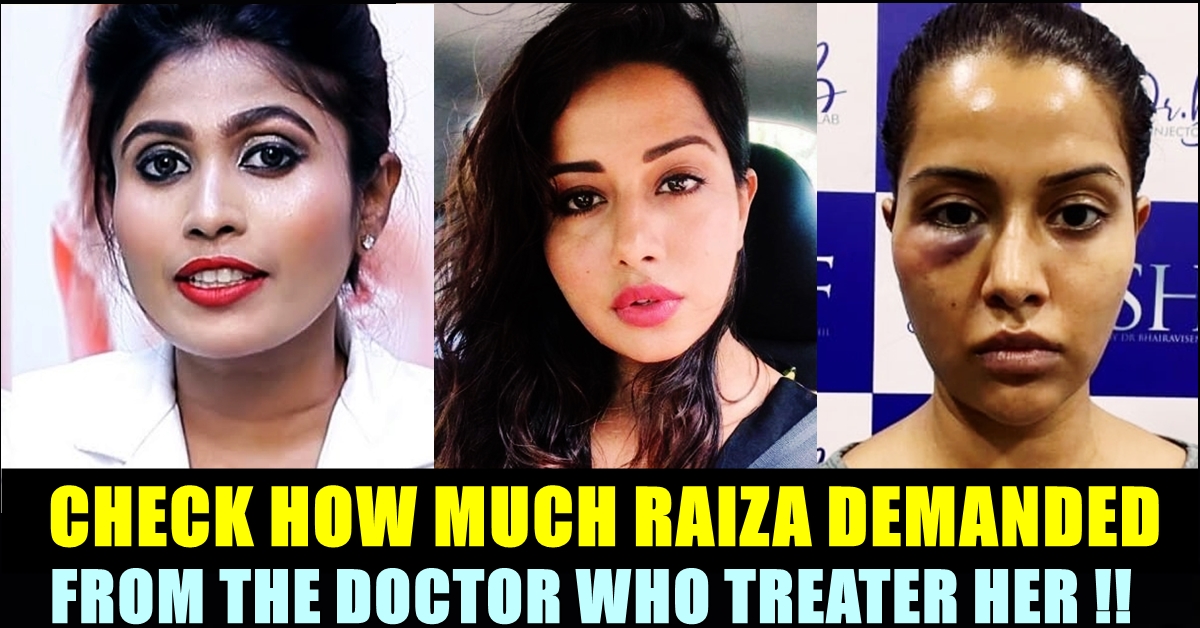 Raiza Wilson came up with a press note stating that she is the victim of the medical treatment performed to her by Dr. Bhairavi Senthil and not the other way around. The actress accused the doctor of extorting money from innocent people through false advertisement and promotion. The actress also updated about the legal action she initiated against Dr. Bhairavi Senthil and claimed Rs. 1 crore from her for the deficiency in her service.

“I consider Medical Practitioner yields humanitarian service to the public rather than extorting money from innocent people through false advertisement and promotion. Further, Doctors extorting money by claiming more than that prescribed by the medical rules from innocent people would also be unlawful. Finally, a doctor must respond to her patient’s request for assistance in an emergency, and the patient must not be neglected.” Raiza said in her press note.

Dr. Bhairavi Senthil who treated Raiza through her Skin health foundation, released a press note earlier saying that Raiza had no complaints after undergoing the same treatment in previous occasions. She who dubbed the bruises as “minor side effects”, said that it will heal naturally within few days and added that it won’t cause damages to the skin. Read : Doctor Released A Press Note Replying To Raiza’s Accusation !! She also demanded and apology from the actress and accused her of causing defame, mental agony to her clinic and herself respectively.

A week ago, Raiza uploaded a picture of herself suffering a deep swell in one of her eyes and said that she visited Dr. Bhairavi Senthil whose Instagram bio says that she is a Dermatologist, CEO, Medical director of Skin health foundation for a simple facial treatment.

“l approached Dr Bhairavi Senthil based on her advertisement on various social platforms to perform certain cosmetology procedures. I have suggested wrong treatments by Dr Bhairavi Senthil and her staff from the beginning of the consultation only to extort money. Also, I have been denied emergency treatment by Dr Bhairavi Senthil while my life was at threat due to their procedure. The shreds of evidence available to me (including a doctor examination) clearly shows that I am a victim of a wrongful procedure conducted by Dr Bhairavi Senthil. Hence an apology is ‘Untoward’.” Raiza said in the statement she released on Saturday.

“l am a victim of a negligent act caused by Dr Bhairavi Senthi and staff. In future, no one should undergo the pain I experienced. Being an actor, I consider myself responsible for my actions to the society. Hence to ensure that further no innocent people are affected by Dr Bhairavi Senthil service, I have initiated a complaint before the National Medical Commission and Tamil Nadu Medical Council against Dr Bhairavi Senthil and others for conducting an investigation in due course of law, and I hope the decision of the authority would be revealed after investigation.” the actres said and updated about her legal proceedings.

“Finally, I initiated a legal proceeding claiming ‘One Crore’ as damages from Dr Bhairavi Senthil for deficiency in her service. In due course of the said legal proceeding, any damages awarded in favour of me would be donated to ‘Victims of Medical Negligence”. With faith in God and Hope in Judiciary, I pray that people should always be provided with the best medical services.” she concluded.