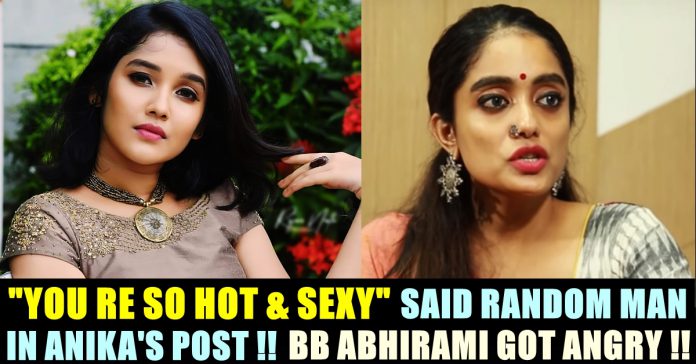 “They Don’t Even Leave Kids” Abhirami Wants Online Harassers To Be Jailed !!

On seeing an online user making insensitive comment in a post of child artist Anikha Surendran, Abhirami Venkatachalam who rose to fame among Tamil online audience through Bigg Boss show’s third season got frustrated and said that she wants them to be jailed under The Protection of Children from Sexual Offences (POCSO) Act.

Anikha Surendran acted with Ajith kumar in his films “Ennai Arinthaal” and “Viswasam” as his daughter. The 15 year old actress is very much busy posting pictures from her photoshoots in Instagram in which she enjoys 9 lakh followers. Check out some of her recent posts here :

Stuck in her own cocoon, Wondering what will set her free, She waited for long, Until she came out as a Blue Butterfly…………🦋 . . . 📷@vishnu_whiteramp . Costume courtesy: @yaga_designs Styling: @zohib_zayi Makeup : @shibin4865 : @whiteramp_photography @akash_sidharth_ @__keerthana_s . Caption: @_the_twilight_and_the_dusk_

In one of her recent post, a random Instagram user made an insensitive comment on her post which irked Abhirami Venkatachalam who also shared screen space with actor Ajith Kumar in “Ennai Arinthaal”. Sharing a video which said that pedophiles should be arrested, Abhirami made a severe warning through her Instagram story. She said that the online users can be traced through IP address and expressed her frustration.

here’s the screenshot of her story :

“Exactly this has to be done to all the cyber bullies… by the way didn’t I say that we can get your details with IP address… Shame on such people they don’t even leave kids… and they talk about us wow” Abhirami wrote in her story by attaching a video of Sarvs Sagha of Plip Plip.

Watch the video Abhirami posted below :

This is not the first time that Abhirami is raising voice against cyber bullying. Since her Bigg Boss exit, she has been facing online criticism and mindless trolls but she never failed to call them out.

The number of abusive texts that are being received by females in social media platforms from abusers is increasing in vast number. Knowing that there is no severe laws created yet to put them behind the bars for sending a text in social media, people, mostly men who owns a smartphone are sending abusive texts to whomsoever they want without giving a thought about the consequences. It is high time for such people to think twice before letting their words out in social media.

Oviyaa, initially rose to fame through the film Kalavani in which she paired opposite to Vimal as school student. She grabbed the attention of...