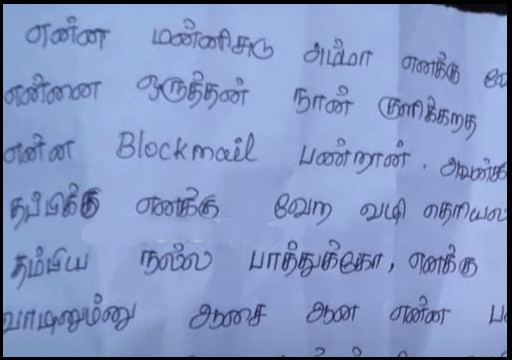 A Tamil nadu based Woman killed herself after getting blackmailed with a bathing video of herself, according to a video uploaded by Polimer news channel. The video shows a letter presumably written by the victim before committing suicide and her mother who got shattered emotionally narrated the ordeal to the media.

“Forgive me mother. I have no other option. A man blackmailing me after recording a video of myself bathing. I know no other way to escape from him. Forgive me” the letter of the victim reads. 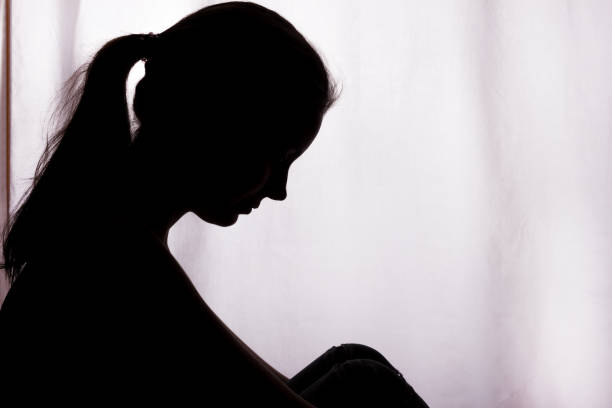 “Take care of brother. I wanted to live for a long time but what am I supposed to do. God didn’t leave me any other options. I don’t have no other way. Tell Vijay, Ajith not to tell about it to Mama” the letter further reads.

Mother of the victim, while interacting with the media, said “When I got up and saw, my daughter was not there. I thought, she went to the garden area and checked there. She was not there. When I got up, I saw her cell phone, pen, her anklet and the paper in which she was written about the reason behind her decision. I didn’t see the paper initially and saw her cell phone alone and started searching for her” Woman’s mother said to the media.

“When I went to the cow hut and lighted the torch, I saw my daughter hanging with her tongue out. I shouted for help and everyone around came to help me. When I asked them what was written on the paper, they said that she killed herself as someone recorded her video while bathing” She further said. 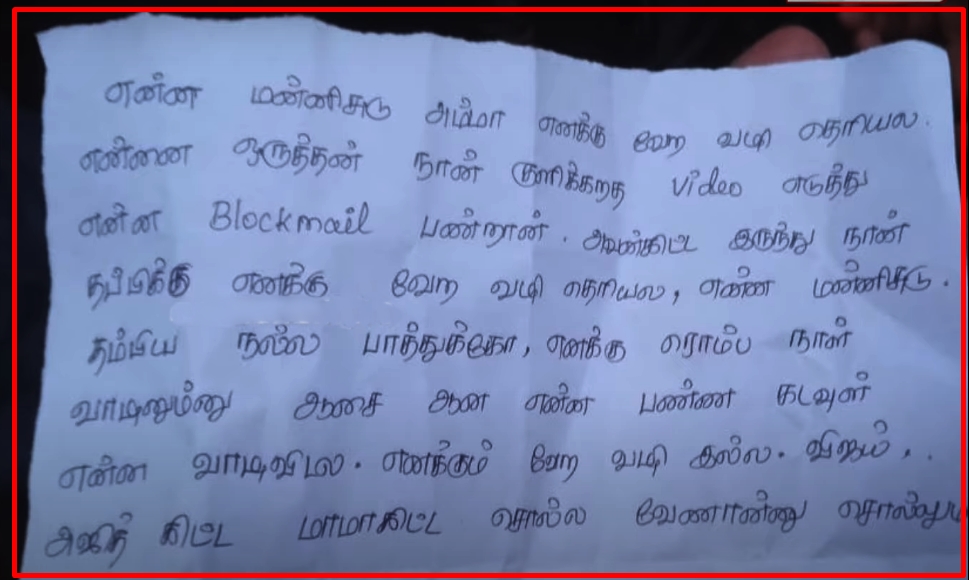 “She said somone threatening her with the video through her letter and asked me not to tell about it to her Mama” the mother added. The victim didn’t mention about the culprit who threatened her. The girl’s one of the relatives said “Three numbers are in block list, We have submitted the numbers to Police official and they have promised to take action. We can find the miscreant once the police starts investigating the three numbers” he said.

“Police co-operated with us and we want the accused to the punished severely” he further added.

David Miller Replied To A Tamil Fan Who Questioned On His “WWE Style” Entry !!

After five long years, South African destructive batsman David Miller finally opened on why he entered ground in WWE style to bat in 2015....

Shah Ra, also credited as Sha Ra, is an Indian film actor who made his acting debut in the Tamil film Meesaya Murukku. He...

Panimalar Panneerselvam is a popular journalist who worked in various television channels. Known for her bold opinions, Panimalar has a separate set of followers...