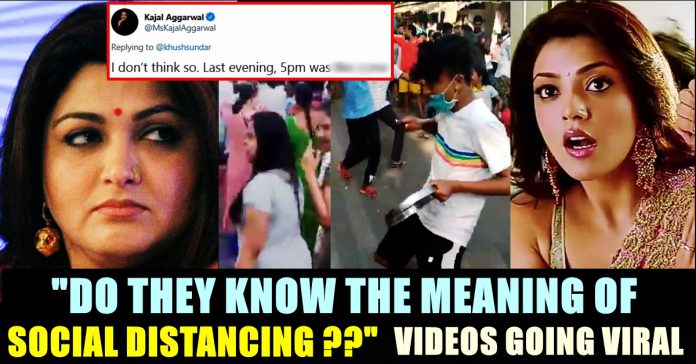 “They Are Celebrating It Like Carnival” Kajal Agarwal & Khushboo Reacted !!

Khushboo questioned if people understood the actual meaning of Social distancing after seeing them celebrating on streets during 5 PM on Sunday. As per the request of Prime Minister Narendra Modi, people across our country clapped for those who are tirelessly helping the nation in this crucial situation. In his statement of Thursday, Modi said millions of people are working day and night in hospitals, airports by not taking care of themselves. He urged citizens to stand on their doorways or balconies on 5 o clock in the evening of 22nd of March to clap hands and to ring bells in a way of encouraging them.

THANK YOU to EACH AND EVERY ONE of you who are selflessly serving and saving us .. our heartfelt gratitude love and respect to all of you and your families. May God keep all of you super safe. @narendramodi #IndiaFightsCorona #JanataCurfew #ThankYouFrontLiners pic.twitter.com/epbSLGUeh3

This is NOT what our PM ⁦@narendramodi⁩ ji wanted. Don’t they understand what social distancing means? pic.twitter.com/XR0EFMXr7s

If you make everything as an event, this is what you get.

How shallow the leader of a country is can be gauged from his inability of predicting the outcome of his announcements/decisions.pic.twitter.com/BGfQBcBMpV

Hi @pilibhitpolice @Dmpilibhit , this photo is from your official tweet . Can you please explain why the police chief and DM totally disregarded safe – distance norms and led this procession at 5 pm during the #JantaCurfew ? …. pic.twitter.com/xyLrnoGNg5

Along with the journalists and other public people, actress Kushboo also questioned through her official twitter account. “Have our fellow citizens even understood the meaning of #Social_Distancing ?? I doubt..” she wrote in her tweet.

Actress Kajal Agarwal who is known for acting in Tamil films such as Thuppakki and Vivegam replied to the tweet of Kushboo by saying that the 5Pm of Sunday looked like carnival. “I don’t think so. Last evening, 5pm was like some carnival. People reunited on their terraces and partied. Redundant. Don’t you think?!” she wrote in her reply tweet.

I don’t think so. Last evening, 5pm was like some carnival. People reunited on their terraces and partied. Redundant. Don’t you think?!

Many cinema celebrities also joined public to thank those people who are serving for the wellness of the nation. Bollywood Superstar Amitabh Bhachchan, Telugu actor Allu Arjun, Tamanna Bhatia, Madhavan and many other cinema celebrities uploaded photos and videos of them thanking those who are working hard.

Previous articleMinister’s Severe Warning To Those Who Have Travel History !!
Next articleIndia To See 30,000 Deaths By May ?? Dreadful Report

Finally Blue Satta Revealed Why He Did Not Review 90ML Movie !! Check What Has To Say !!