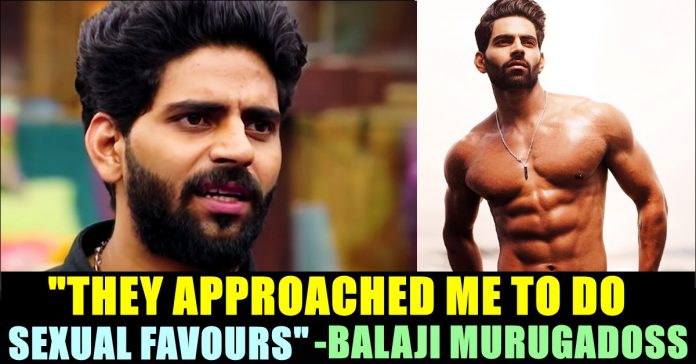 An old video of Balaji Murugadoss interacting with reporters is trending now as he is competing for the Bigg Boss title with some of the big names in Kollywood film industry such as Aari Arjunan, Ramya Pandiyan, Rio Raj etc. The video shows the aspiring actor talking about how modelling industry works and also counters the statements of another model whose identity is unknown.

Balaji who confronted almost all the contestants in the house, came under scanner after having a special relationship with Shivani Narayanan. Mother of the 19 year old TV actress entered the house during the “freeze” task and condemned her for flirting with him. Balaji’s heated arguments with Aari Arjunan gained him wide fame among the followers.

Now, an old video of the model talking about how modelling industry is functioning is doing rounds in social media platforms. In the interview, Balaji reveals that he faced sexual harassment in modelling industry during the initial stage of his career. “They called me during my initial days. That’s what life is all about. ain’t it ?? Every industry faces similar problems. Even in IT companies, higher officials are harassing their employees sexually” Balaji says.

“He accuses me of winning the title by sleeping with authorities. I won the title in a honest way but it looks like he unwantedly pulling my legs” Balaji could be seen saying. Watch the video below :

On seeing the interview of Balaji, followers of the Bigg Boss show, pointed out how Balaji degraded Sanam shetty, winner of a beauty competition. Not many days ago, Vijay Television deleted a promo they uploaded in their social media handles. On seeing all the social media handles of Vijay television removing the promo, netizens came up with a speculation assuming that a particular frame of a letter written by Sanam to make a complaint against Bala in the court (artificially created for a task) made them to delete the promo.

Watch the video below where Balaji had an argument with Sanam shetty regarding the same :

On seeing these contradictory statements of the model, followers of the Kamal Haasan hosting show made a video compiling both the incidents. Watch :

A two year old video of National General Secretary of Bharatiya Janata Party C.T Ravi saying that he is a not a Doctor to...