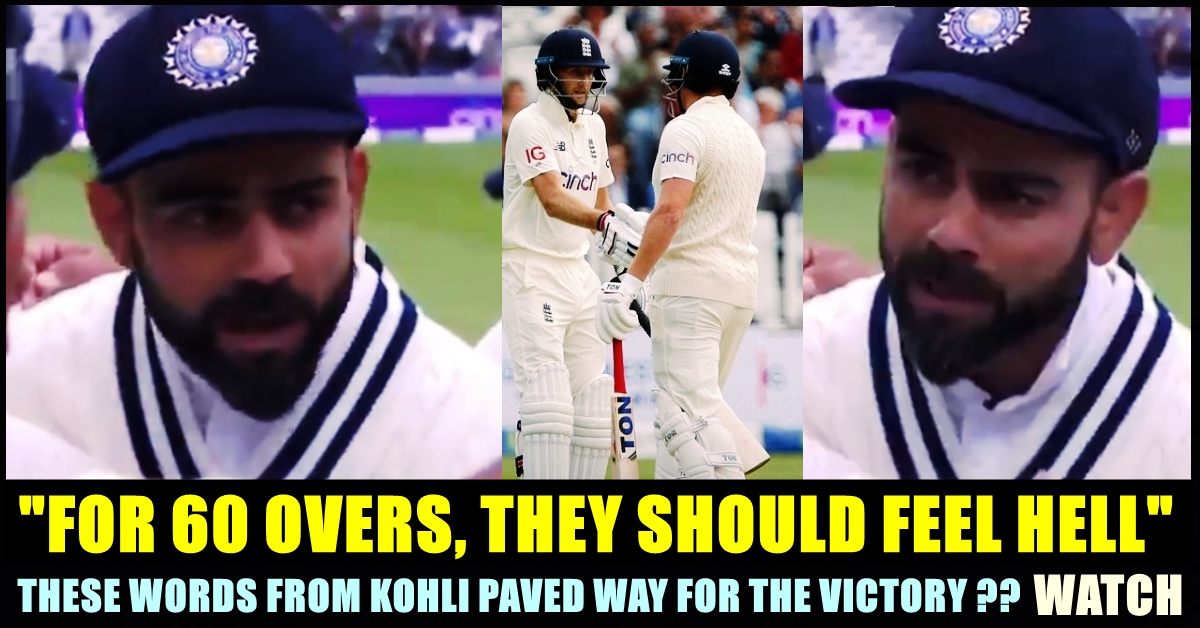 A particular video clip of Indian captain Virat Kohli delivering a motivational speech to his players prior fielding for the second innings of England goes viral in social media platforms. In the video, a furious Kohli could be seen saying that the batsmen of England should feel the hell while spending the time in their crease. The match went in favour of team India and Kohli was being lauded by the users of Internet for the way he guided his men towards the victory path.

The nail baiting fifth day of the second test ended up with the visitors clinching the victory by 151 runs. Setting a target of 272, team India bowled out team England for mere 120 runs and registered history. Fans, celebrities and cricket lovers from across the country have been celebrating the win by lauding team India. Memes and reactions are also flooding the feed of the Internet to celebrate India’s victory.

Those who were following the match keenly, would say that earlier, at the start of the day, all three results were eminently possible. India had a lead of 154 runs in the second innings with 4 wickets in hand. Resuming on 181/6, India had Rishabh Pant (22) and Ishant (16) dismissed by Ollie Robinson in the opening half-hour and that brought Mohammed Shami and Jasprit Bumrah to the middle. Shami and Bumrah put up an unbeaten 89 runs for the ninth wicket to frustrate England, which had reduced India to 209/8 on what turned out to be fractious morning’s play.

Chasing 272, England were bowled out for 120 in 51.5 overs with skipper Joe Root top-scoring with 33. Siraj picked four wickets in the second innings which includes Buttler’s whereas Bumrah sent 3 batsmen of England away. With Ishanth picking 2 crucial wickets, Shami did his part by taking one wicket. As soon as the match ended in India’s favour, fans of team can’t keep calm which is evident through the posts that are surfacing in the social media platforms.

The decisions made by Kohli throughout the match, including the time he chose to announce the “declaration”, were successful in the match. Now, a video of the Indian skipper, motivating his boys before fielding for the fourth innings of the match got surfaced in the Internet. “For 60 overs, they should feel hell out there”, Kohli scould be heard saying in the viral video.

The speech was effective indeed as the openers of England team Rory Burns and Dominic Sibley were sent back to pavilion in a quick span. Team England managed to score only 120 runs with Joe Root being the top scorer with 33 runs. Comment your views on this speech of the Indian skipper !!