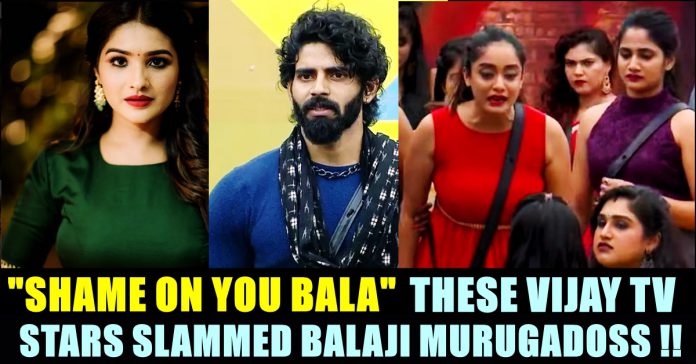 Former Bigg Boss contestant Abhirami Venkatachalam and serial actress Sharanya condemned Balaji Murugadoss for an alleged comment he made in an episode against Sanam shetty, his co-contestant in the Bigg Boss show. Abhirami said that no one has to sleep with anyone to win the crown in that pageant competition and Sharanya said that Vijay Television should take action against Bala if he really said it.

It all started when the social media handles of Vijay Television deleted the first promo of a day’s episode. On seeing all the social media handles of Vijay television removing the promo, netizens came up with a speculation assuming that a particular frame of a letter written by Sanam to make a complaint against Bala in the court (artificially created for task) created made them to delete the promo.

Since the screenshot surfaced in the internet, a set of people are demanding action against Bala for slut shaming Sanam shetty. Later, a twitter user named as Imadh came up with a video evidence proving Balaji’s derogatory comments against Sanam. In the video clip, Balaji can be seen saying to Sanam that she should have talked about herself instead of dragging the entire women society.

Reacting to this controversy, Abhirami Venkatachalam posted an Instagram story writing “It’s not a dubakoor pageant, don’t have to sleep with anyone.. If you have it in you, you will definitely reach the crown. all the best lovelies, I’m happy to be oriented with the team.. my wishes to all the participants, let’s see who’s getting crowned tamil nadu 2021”

Sharanya who is known for acting in Vijay TV serial “Nenjam Marappathillai”, posted a story writing “If this is true, Shame on you Bala, Expecting Vijay Television to take a stand on this. Verbal abuse on a woman on any platform is highly condemnable”

If you are still feeling young and hope for something better to happen in the future, here's something that will make you feel older....