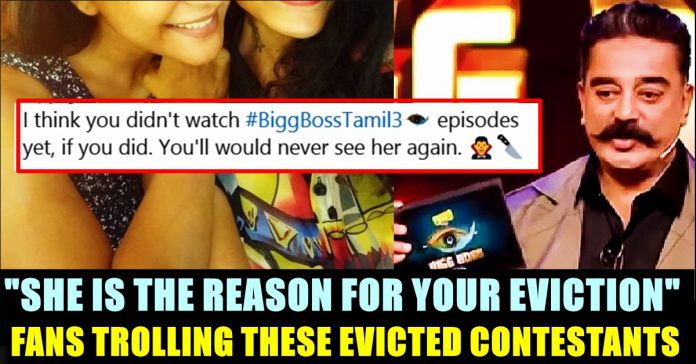 These Two Evicted Contestants Met Each Other & Happily Posted Picture!! Got Extremely Trolled !! Now both of them got evicted from the house due to lack of votes from the audience. Abhirami who met Mohan Vaithya once getting evicted, met Sakshi and posted the picture in her social media accounts. The post of Abhirami read as “Seskyyyyy…. “Papa Paadum paatu ” – meeting this one after a bindasss exit of ours..♥️”

After seeing this post, many of the Bigg Boss followers trolled the duo and asked Abhirami not to maintain relationship with Sakshi. They also asked her to watch all the episode before celebrating her as Sakshi nominated Abhirami before her eviction. Check out some of their comments here :

Sakshi is the main reason that you are out.. you need to watch all episodes, even after that u want to be close to Sakshi, it means that you are not valuing people who are wishing you wellness and happiness

Please watch the episodes from the begining.she us the biggest enemy of yours.please watch and decide who do you let to stay in your life..she is a jealous person..dont share anything personal about yours

I think you didn’t watch #BiggBossTamil3 episodes yet, if you did. You’ll would never see her again. 🧛🔪

Did u watch BiggBoss fully before meeting her?? 🙄🙄🙄

She only nominated you so hug her tightly

Be careful at her please watch all Episodes😂😂😂 with Kurumpadam 😂😂🤣

Don’t believe her Abhi, she’s the one who nominated u every single time, even after u both hugged and called each other best friends, you’re genuine, she’s definitely not 🙄❤️ stay away from toxic ppl like her, please Abhi ❤️ keep a limit with her, she’s a snake🐍

Omg! She is the backstabber! Kindly see week 2 and week 3 episodes

What do you think on these comments ?? Let us know your views !!

RJ Vigneshkanth is one of the popular youtuber in Tamilnadu. He also started his career in Tamil cinema as comedian in Hip hop Tamizha's...

India's Prime Minister Narendra Modi met Kamala Harris for the first time after she became the Vice President of United States in January 2021....