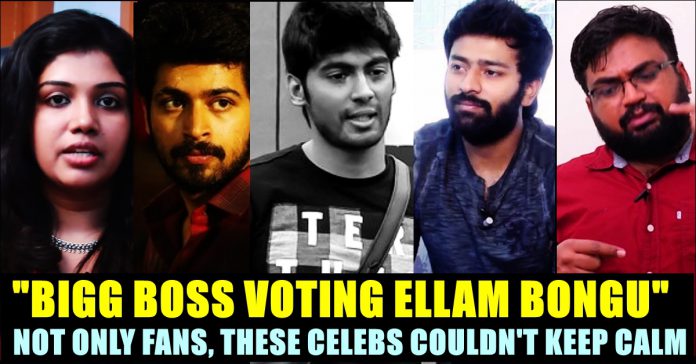 Not only fans, even many celebrities couldn’t believe that Tharshan got evicted from the Bigg Boss Tamil show season 3. Being one of the youngest contestant of the show, Tharshan is the only contestant who took the physical tasks of the game seriously. The eviction of him made people slamp the Television channel and even Kamal Haasan asked the fans whether they voted for Tharshan or not on seeing their applause for the model.

Starting from popular Kollywood hero, Shanthanu Bhagyaraj to serial actress Neelima, many expressed their disappointment on Tharshan’s elimination. Shanthanu said that the voting system of Bigg Boss show is fake. Check out his tweet below :

“Singakutty” actor and grandson of legendary actor Sivaji Ganesan, Shiva kumar said that it is a political move by the Television. He said that he couldn’t believe his eyes on Tharshan getting out of the house.

The program says”Expect the unexpected “.But I highly doubt whether it was a political move and not the people choice! Truly cannot believe my eyes seeing #Tharsan Leaving so early! #Tharshan #TharshanPeoplesChamp #TharshanTheRealWinner #BiggBossTamil #BiggBoss #BiggBossTamil3

“Pyar Prema Kadhal” actor Harish Kalyan said that Tharshan won many hearts through his Bigg Boss stint and wished him the best.

Well played #Tharshan You have won so many hearts. My best wishes to all your future endeavours.. shine bright #BiggBossTamil3

Former Bigg Boss contestant Harathi said that she already thought that Tharshan would get evicted as he was celebrated by people very much. She also said that he is the pride of his nation.

Reviewer Prashanth requested the directors of Kollywood to make use of him as soon as possible.

Well. Dear tamil directors – Make use of his huge fame !! Make a movie with him as soon as possible !! #Tharshan pic.twitter.com/tztMj2pcjw

TV actress Neelima who is known for appearing in films like “Thimiru” said that he is the real winner and believed that an amazing career is waiting for him in outside.

You are my BIGG BOSS 3 title winner darsh!! An amazing career is awaiting for you 💐 stay strong man!!! pic.twitter.com/jQGT6nH5iT

Former season’s Bigg Boss title winner, Rythvika couldn’t believe that he got evicted and posted an Instagram story to express it. Check out her story here :

Second season’s contestant and actress Yashika anand posted stories of fans comparing herself with Tharshan by saying that they deserved to be in the finals.

Director actor Cheran said that he is capable of winning the finals and he couldn’t come out of the shock after hearing his eviction. Check out his post below :

Sakshi Agarwal also posted tweet regarding the elimination of her co-contestant :

Now only came to know that #Tharshan evicted from #BiggBoss show.I am totally shocked on hearing this .He is a deserving contestant to win the title.Anyway #Tharshan bright future waiting for you and all the best for your future. #BiggBossTamilS3 @vijaytelevision @hotstartweets pic.twitter.com/TxxRSwhhSb

Here’s what Kasthuri has to say :

No matter who wins #BiggBossTamil3 , The biggest winners will be Tharshan and Mugen, they are going to be Flooded with offers.
I cant wait to do a bunch of ads with them !

What do you think on these reactions from the celebrities ?? Comment your views !!

Previous articleFan Warned Theatre Owner To Keep His Screen Safe During FDFS Of BIGIL !! Check Out The Reply He Received !!
Next articlePolice Attacked Conductor For Asking Them To Buy Ticket !! SHOCKING VIDEO !!

Tharshan is one of the most loved male contestant inside the Bigg Boss house got evicted from the show due to lack of...