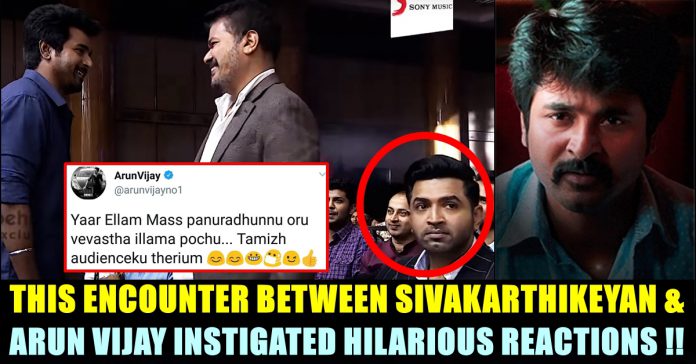 Actor Arun Vijay got his major breakthrough in Ajith Kumar’s “Ennai Arinthaal” in his film career which spans more than 24 long years. In the film he played the role of an Antagonist. The actor is now very much busy in signing movies as protagonist. His one of the upcoming film Mafia directed by Karthick Naren is gearing up for release.

Months ago the actor came under scanning for a tweet of him which is believed by social media users that it is about Sivakarthikeyan. During the release of Sivakarthikeyan’s Seema Raja trailer, Arun Vijay posted a tweet and deleted it immediately. The post read “Yaar Ellam Mass panuradhunnu oru vevastha illama pochu…Tamizh audienceku therium”

Though Arun deleted it immediately deleted, the screenshot of it went viral across the Internet. Check it out below :

Arun Vijay even clarified to the fans that the tweet was not targeted on Sivakarthikeyan. He made it clear that his account was hacked to his fans and followers. But still many fans are considering both the actors as rivals. In the award function that conducted by Behindwoods youtube channel, both Arun Vijay and Sivakarthikeyan participated. In the video released by Behindwoods, we can see Sivakarthikeyan making his entry to the function.

On the way to his seat, we can see Sivakarthikeyan hugging director Lokesh Kanagaraj and greeting director Shankar. After wishing RJ Balaji, the “Kana” actor will go past Arun Vijay to share few words with Ram Charan.

A particular screenshot of Sivakarthikeyan shaking hands with director Shankar went viral in social media. But Arun Vijay who was seen sitting in the picture grabbed the attention of the netizens. The picture instigated trolls and memes on both the actors and we can see Arun Vijay turning his head towards the other side. Check out some of the reactions on the same :

When we saw our ex suddenly in life pic.twitter.com/bgXsGj8Jz4

My crush and her boyfriend talking each other..