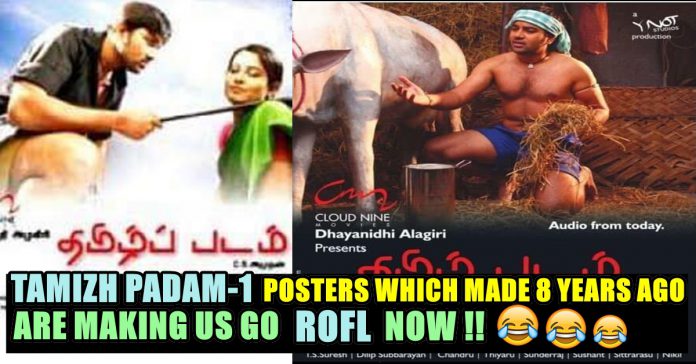 Tamizh Padam is a franchise which is directed by C.S Amudhan. It is released in theatres this Thursday. Last month the makers released a 40-second teaser that made us ROFL. In the teaser of Tamizh Padam 2, the makers trolled several politicians and big wigs of Tamil cinema. Right from Rajinikanth to Ajith, the makers did not spare anyone. In the film, there are references of Tamil films like Vijay Sethupathi’s Vikram Vedha, Ajith’s Vivegam and Mankatha and Vijay’s Mersal and Thuppaki and Rajinikanth’s Kabali. Twitter is cracking up with the way the makers have trolled Kabali and Vivegam in this one.

The trailer and teasers suggest that this time, the film has not spared politicians either. From films of Superstar Rajinikanth to Sivakarthikeyan’s Remo, the film takes a dig at everything that’s popular in Tamil Nadu.
[wp_ad_camp_1]
Starring Siva, Disha Pandey, Iswarya Menon and Sathish, Tamizh Padam 2 is produced by S Sashikanth of Y NOT Studios, which also bankrolled the hit film Vikram Vedha. Apart from movies that acted as prey for this “parody” there are lot of “political” moments that are brutally trolled.
[wp_ad_camp_1]
This first part of this film is no way less than the second half. We can also hear some of the fans saying that they loved Tamizh Padam-1 , more than the sequel. At this time we got to witness the posters of Tamizh Padam-1 and love to share it with you. Check out below :
1. What do you think on these posters which are made 8 years ago ??
Previous articleForget C.S Amudhan, This Spoof Video Of Venkat Prabhu & Shiva Brutally Thrashes Kollywood Cinema !! Absolute Laughter !!
Next articleCow Injured & Killed Leopard As It Killed Its Calf !! SHOCKING Revenge Story !!

Actress Ritika Singh reacted to the enormous number of comments from her followers who called her as "Noodles Manda". Ritika Singh one of the...