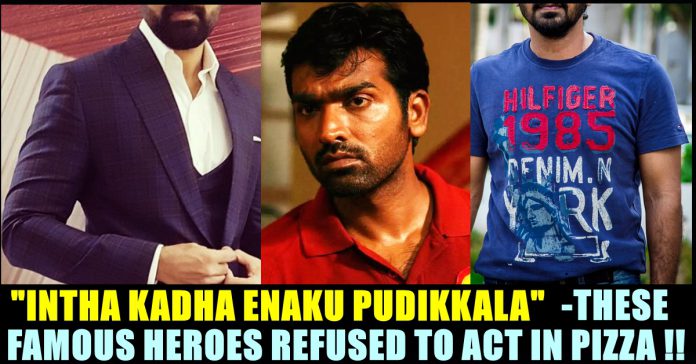 Pizza is a horror film that revolves around a Pizza delivery person and his newly-wed wife. With Aadukalam Naren, Jayakumar, Pooja Ramachandran and Bobby Simha playing the supportive roles, Vijay Sethupathi and Ramya Nambeesan played the lead roles in the film which is a debut for Karthik Subbaraj one of the important filmmakers of new age Tamil cinema. Santhosh Narayanan composed music for the film with Gopi Amarnath handling the camera.

Pizza released on 19 October 2012 and went on to become a major critical and commercial success. The film which was made of a budget of Rs. 1. 42 crore, collected profit Rs. 5,6 crores, said producer C.V Kumar in the interaction with Chithra Lakshmanan for his youtube channel. Throughout the interview, Kumar talked about his early days in Tamil cinema and about how he became one of the important names in the Kollywood film industry.

C.V Kumar said that Karthik Subbaraj narrated him the story of Jigarthanda to him first. “I said that the film would consume minimum Rs. 5-6 crores and asked him to make a film for a smaller budget. He also listed out the actors who refused to act in the film after hearing the story. “After finalizing the script, Karthik Subbaraj is the one who recommended Vijay Sethupathi to me. We approached Prasanna to do the lead role. He refused. We also approached Vaibhav to do play lead. He heard the script and said that he didn’t like it.” C.V Kumar who added that Oviyaa was considered to play the female lead.

“Karthick Subbaraj asked just Rs 70 lakh to make the film. I offered Rs. 2 crore for him to make and I just spent Rs. 50 lakh during the final day of the film’s shoot. I invested just Rs. 50 lakh and made a profit of Rs. 5, 6 crore through that film” C.V Kumar said.

C.V Kumar, in the interview, revealed how Karthick Subbaraj refused actor Siddharth to play the lead role. Karthick feared of a huge star like Siddharth making changes in his script, according to C.V Kumar. Throughout the interaction, C.V Kumar opened on how his decisions on producing “Soodhu Kavvum” and other films gained him an identity in Tamil cinema.

Previous articleLokesh Kanagaraj Trolled His Own Fan !! Tweet Goes Viral
Next articleActor Siddharth Lashed Out At A BJP Supporter For Tagging Him In Twitter!!

Brad Hodge was at the receiving end of some nasty comments on social media after he commented on a commercial video featuring Indian cricket...