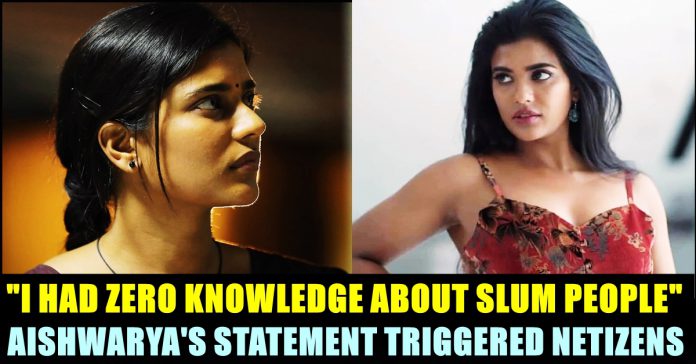 Actress Aishwarya Rajesh became a victim of online trolls due to her contradictory statements in two different public interactions. The actress who rose to stardom through her sheer hard work, is enjoying a separate fan base right now. With love, she also started receiving hatred from the public as every top-tier actors do. Now, netizens have came up with a comparison video of her statements in the year 2015 and 2020, to troll her. Recently, she was forced to delete her “Hindi Theriyathu Poda” post due to the harsh comments she received.

It may look that actress Aishwarya Rajesh rose to fame in Tamil film industry within a short span of time but the struggles she faced to reach the height is immense. After Nayanthara, Aishwarya Rajesh is the only heroine in Tamil film industry who manages to get opportunities to play lead role in female oriented movies. Aishwarya Rajesh was brought up by her single mother as she lost her father when she was 8 years old. She is currently working as lead actor on 6 to 7 female oriented movies after the success of her “Kanaa”.

After doing minor roles in films such as “Attakathi”, “Puththagam”, Aishwarya Rajesh gained widespread acclaim after appearing in Manikandan’s “Kaaka Muttai”. Before her movie stint, she was a television presenter in a comedy show called “Asatha Povathu Yaaru?” on Sun TV and was a participant of Manaada Mayilada dance reality show.

Earlier this year, Aishwarya Rajesh gave a motivational speech at the TEDx talks. In her speech, Aishwarya narrated the struggles she went through in life before becoming a successful actress. She said that she had three elder brothers and lost two of them due to tragic reasons. The actress stated that she started her life as a girl who belongs to a lower middle class family in an housing board in Chennai. Her mother who was not educated, sold sarees and worked as an LIC agent to feed Aishwarya Rajesh and her brothers. “Through her hard work she gave us good education, despite of being a single mother” said Aishwarya Rajesh who went on to explain how she started her acting career.

Chopping the particular video clip where Aishwarya says that she lived in a housing board during her childhood, Netizens compared it to a five years old video where she said that she doesn’t know the culture of slum community. During the “Kaaka Muttai” period, Aishwarya, in an interaction can be seen saying that she have zero knowledge about the people of slum area.

By comparing the two videos, Netizens slamming Aishwarya Rajesh. Check out the posts below :

However, Aishwarya Rajesh could have said that she doesn’t know the culture of people who lives in the particular slum of Saidapet area where the entire film “Kaaka Muttai” would take place. Comment your views on these statements of the actress !!

“I Read 20,000 Books So Far” – BJP Leader Annamalai!! Got Brutally Trolled By Netizens