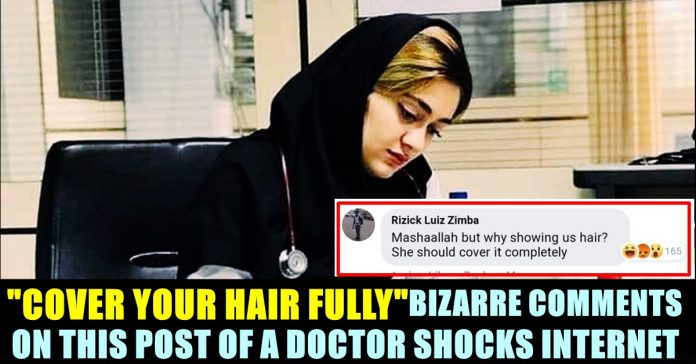 Every religion in the world has its own beliefs and people are expected to respect the beliefs of other religions. However, a majority number of Internet users couldn’t tolerate the comments surfaced in a Facebook post of a female doctor. She who seemingly belonged to Muslim community, was seen wearing a hijab without covering her hair and face. After seeing a vast number of comments schooling her to cover her hair, trolls started surfacing against the people who advised the working woman.

In this modern era, women from across the world are competing with men in every field. Being in the world, noble leaders of which trying to uphold equality in the first place, men ordering a woman to cover her fully against her will, left people no choice other than trolling those who made the command. Irrespective of the fact that people should respect the beliefs of other religions, people who belong to the same Muslim community expressed their disappointment over the comments of few people in that post.

A Facebook page named as “New Muslims Revert” with 4 lakh 38 thousand plus followers which claims itself as a “Non-profit organisation”, is constantly posting the pictures of achievers who belong to the Muslim community. One such post uploaded on 25th of August, contained a picture of a Doctor who was actively working. She who can be seen carrying a stethoscope around her neck, was writing something when the picture was captured.

So far, the post has received 12,000 plus attractions and 2,000 plus reactions with 800 plus shares. Most of the top comments the post received were written in a way of schooling the doctor to cover her hair completely which is visible in the picture. “This woman is just a Muslim by name” wrote of a facebook user whereas another one wrote “She is not covering her hair. All shows. I don’t get it”

Check out the small glimpse of such comments below :

On seeing these kind of comments, trolls flooded against them in the same post, result of which the post went insanely viral among the netizens that it got surfaced in other social media platforms such as twitter and Instagram.

Comment your views on women being oppressed in the name of culture, religion, nationality, race and gender !!