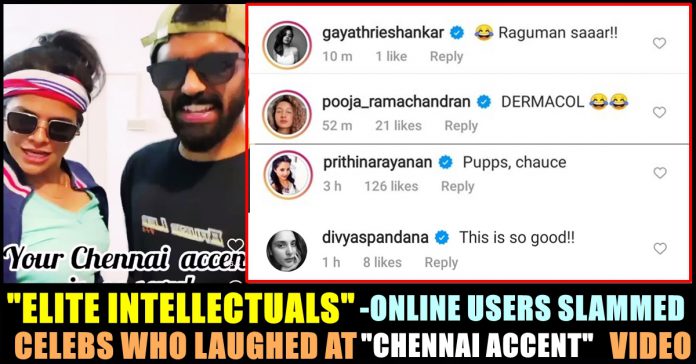 Stand up comedian Abhishek Kumar deleted an Instagram reel video he made with actress Maya S Krishnan on the accent of Chennai people and sought apologies as it received flak from the users of Internet. Now, a screen shot of a number of the comments of some of the known celebrities is doing rounds in the micro blogging social media platform with the users of the medium slamming the formers. The comments were made in a way of endorsing the reel video which sparked outrage among the majority number of active online users.

In the now-deleted video he made with Maya S Krishnan, Abhishek tried to make humour by recreating the “slang” words Chennai people use. Titling the video as “Sexy Chennai Accent”, the duo made fun of Chennai people who utter the English words in a wrong way. The video created huge outrage among his followers which made the creator to delete it and seek apology.

Abhishek Kumar is enjoying one and half lakh plus followers for his official Instagram account and identifies himself as an actor, Stand up Comedian, Writer through his bio. He had uploaded 300 plus posts and his recent reel on “Famous Sounds Of Instagram” went insanely viral with many cinema celebrities sharing it in their stories and timelines. Lately, he came up with his next video, depicting how people of Chennai utter particular English words as per their comfort.

With Maya S Krishnan, the comedian pronounced “April” as “Aaapral”, “Station” as “Tation”, “Xerox” and “Jerox” to make fun of those who pronounce those words in that way. The duo went on to say “Sachin Tendulkar” and “Sachun Tendulkar”, “Poori” as “Boori” and “Office” as “Obees”. They also trolled the people of Chennai for calling “Kamal Haasan” as “Kamalagaasan”, “A.R Rahman” as “A.R Ragumaan”. Usage of “Jero”, “Lubber”, “Mitchar” took place in their video as well.

Reacting to the humongous number of negative reactions the video garnered, Abhishek kumar deleted it by uploading a story saying “HEY GUYS. WE’VE TAKEN DOWN THE LAST REEL. AFTER UPLOADING WE’VE LEARNT THAT THE REEL WAS INSENSITIVE AND IT WAS NOT OUR INTENTION TO INSULT/MOCK ANYONE. WE WERE MERELY FOLLOWING THE INSTAGRAM TREND OF SEXY ACCENTS. APOLOGIES FOR THE SAME, WILL MAKE SURE IT DOESN’T REPEAT AGAIN. WILL DO BETTER NEXT TIME!”

However, it didn’t stop the social media users to slam those who endorsed the video as soon as it got uploaded. Prithi Narayanan came up with two more words which people of Chennai pronounce in a wrong way whereas other known celebrities such as Pooja, Gayathri, Divya, Rahul dropped comments, laughing out loud for the reel.

Here’s the screen shot that is going viral in twitter :

Here’s how Twitter users reacted to the comments made :

The Instagram reels have been taken down apparently after realising how insensitive it was. Now what do we do with the people in pic 2 who felt it was just about right and echoed the same? pic.twitter.com/OZDX9dJxMl

Tambrahm humour is just belittling every other community for not being privileged enough. State board jokes, Mylapore jokes, English accent jokes the list goes on and on. https://t.co/DS4fQTWReg

This same Sanghi crowd are the ones who sirichify for all the kodura mokka standup comedys too!!!! https://t.co/17quBbbXn4

This is more worse than his video. Also, what else can we expect from these "elite people" ?! https://t.co/wpK8ERKUpM

Rajasthan Royals Proudly Shared The Number Of Dot Balls They Bowled Against CSK !!

Day after chasing CSK's total of 126 runs with 3 overs to spare, official twitter handle of Rajasthan Royals came up with a tweet...