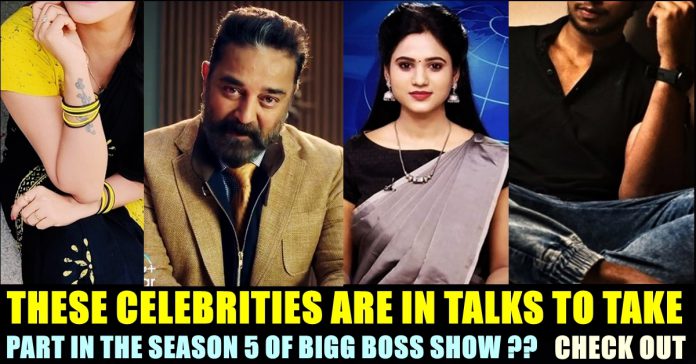 Season 5 of the most awaited reality game show Bigg Boss Tamil is all set to be inaugurated from the end of September month or the beginning of October. Glimpses of the promo shoot starring Kamal Haasan got circulated in social media platforms. The pictures that did rounds confirmed that Kamal who hosted past four seasons, is going to host season 5 as well. Now, it has been confirmed 100% as the first ever promo for the upcoming season got released by the man himself in his official twitter handle.

However, questions about the 15 plus celebrity contestants who are going to take part is being unanswered still and speculations about the same is being made across the Internet. Many media portals came up with a list of celebrities who could participate in the cash rich show. However, a recent report emerged revealing the list of contestants who are in talks to take part in the 100 days show.

In last season, contestants were kept in quarantine before entering the Bigg Boss house due to the COVID 19 restrictions. Now, it has been reported that contestants needs to get fully vaccinated to take part in the show. Bigg Boss management is expected to be more focussed on keeping the audience engaged as shows such as “Survivor”, “Master Chef” from other channels are pulling the television audience.

According to a recent report of Ananda Vikatan, “Cooku with Comali” fame Kani, Pugazh and Rachitha of “Saravanan Meenakshi” fame were approached by the channel management to take part in the Kamal Haasan hosting show. It is common that a number of slots will be allotted in every season for the celebrities who belong to Vijay Television. Kavin, “Thaadi” Balaji, Rio, Nisha were invited by Bigg Boss management only through Vijay TV quota.

Vikatan report said that a model who is a dear friend of last season’s runner up Balaji Murugadoss has also been invited by the channel to take part in the show. Followed by Archana, Anita Sampath who were working in other leading channels, Bigg Boss management is trying to get Sun TV news reader Kanmani and actress Chandhini who is acting in a serial of Zee Tamil as participants.

Apart from these celebrities, many other names such as G.P Muthu, Ramya Krishnan, “Myna” Nandhini, “Myna” Soosan, Vadivukarasi, Ramesh Kanna, Daughter of actress Shakila Milla, Lakshmi Ramakrishnan are rumoured to take part in the show. However, we have to wait for the inaugural episode of the show to see the confirmed contestants who are going to participate.

You Just Can’t Miss These Hilarious Gambhir Memes That Surfaced After Thala-Thalapathy Meet !!

Gambhir became a troll material among netizens ever since he started degrading India's world cup victory and Dhoni's last ball six in the historic...