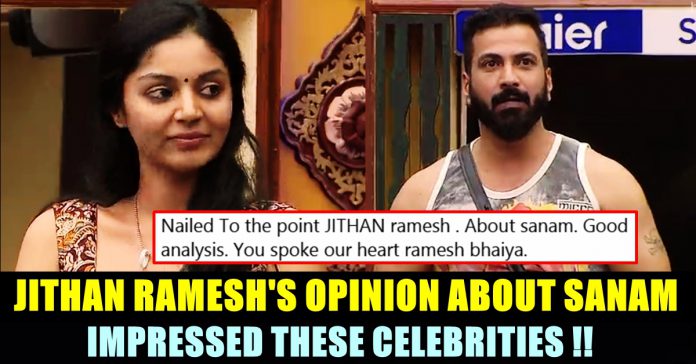 On seeing the very first episode of Bigg Boss season 4, an number of celebrities started supporting Jithan Ramesh, an actor by profession. Being a son of renowned film producer R.B Chowdhary, Jithan Ramesh decided to enter the Bigg Boss show to avoid getting divorced from his wife. “Due to this COVID 19 situation, you know that we all are extremely frustrated. It is good that they called me from Bigg Boss. Instead of getting divorced from my wife, I decided to enter the house to spend my time” Ramesh said to Kamal Haasan.

In the very first day he spent in the house, Jithan Ramesh won the hearts of many fans by being bold and frank. Not only fans, some of the celebrities who are working in film industry, appreciated Ramesh for the way he told the truth about his co-contestant Sanam shetty.

When Ramesh was given the stamp, he punched heart to Ramya Pandiyan and Suresh Chakravarty. When he punched heartbreak to Sanam Shetty, Ramesh said that he feels that the model is very much aware of the structure of the show. “It seems she watched all the seasons of Bigg Boss in the 14 days quarantine. I feel she is doing it to attract her co-contestants. Her activities looks fishy according to me” the Jithan actor said.

He gave his another heart break to Shivani for not mingling with others. The reason he stated for giving heart break to Sanam shetty was impressed a number of celebrities including veteran actress Sri Priya. “Ramesh is kinda rite… I too feel Sanam has a game plan ..good” she wrote in her tweet.

Ramesh is kinda rite… I too feel Sanam has a game plan ..good

Dance choreographer Sathish who worked with big names of Kollywood such as Ajith, posted a tweet writing “Jithan Ramesh Jithujilladi ma nee” he wrote in his tweet.

Along with them, many other people who watched the show got impressed with him which is evident through their comments.