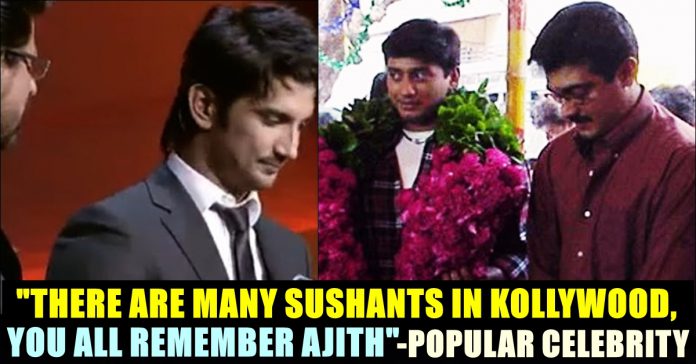 The demise of Sushant Singh Rajput which took place a week earlier, is still making waves in the film industries of India. People concluded that the young actor killed himself due to the Nepotism culture that exists in Bollywood, despite it is evident that Sushant had a life beyond cinema and his thoughts are very much progressive.

When Kangana Ranaut said that Sushant’s hard work went unnoticed due to Nepotism in Bollywood, Vivek Oberoi stated that Sushant went through what he experienced years back. Veteran actor Prakash Raj also said that he survived Nepotism. While many people posted videos and tweets blaming the existence of nepotism in Bollywood for the loss of the young , Rohini Iyer, a popular film journalist and a closest friend of him, said that he never cared about Cinema industry at all. (Read : “He Rejected Your Parties & Hated Fake Friends” – Sushant’s Best Friend)

Now, Actor Ashwin who predominantly works in Kollywood, posted a tweet sharing how young talents are being discouraged in Kollywood. Sharing a post of Bollywood actor Abhay Deol, with whom Ashwin is going to share screen space in “Ithu Vedhalam Sollum Kadhai”, the “Mankatha” actor explained how discrimination takes place on every level.

The post of Abhay Deol is about how he got ignored after acting in a film with a big star like Hritik Roshan. The film which is about a three friends and their 3 weeks road trip, became a huge hit during its release time, both commercially and critically. However, after the release of the film, the award functions nominated Abhay and Farhan in supporting actors category and nominated Hritik Roshan and Katrina in lead categories.

Remembering how he got demoted and forgotten for his performance, Abhay came up with a social media post bashing bollywood award functions. The actor termed them as “family Fare awards” and trolled the entire system of Bollywood through his post.

Ashwin, on seeing the post, said that he went through such situation many times in his career. He who witnessed VJ Abhishek missing out his name while mentioning the lead actors of “Oru Vedhalam Sollum Kadhai”, raised question in the micro blogging site. Popular movie reviewer Abhishek Raaja who manages a youtube channel named as “Open Pannaa” recently produced a video on “Who is Lokesh Kanagaraj?”. In the video, instead of addressing about Lokesh alone, the film enthusiast talked about many upcoming talents including director Rathindran who directed Ashwin’s “Idhu Vedhalam Sollum Kadhai”. While mentioning the actors who played the lead roles in “Idhu Vedhalam Sollum Kadhai”, Abhishek who utters the names of Abhay Deol, Aishwarya Rajesh and Guru Somasunthram, can be seen missing the name of Ashwin who played as one of the lead.

Ashwin, taking this matter to tweet, expressed his emotions through a series of tweets.

the need to hammer every nail that stands out, and in the end an outsider is celebrated and treated like a god, only when they are successful.'Hard work never fails' is a cliche that is only celebrated when the result is a 'public' success.While speaking to @vasukibhaskar…

And while I'm more numb to every new variation of these efforts to sideline, I think people should maybe make an effort to just treat everyone with some respect instead of like dirt, and then treat them like a god later. Treat people like a human being, like you would like to be.

its ironic and only reinforces that people like to back the winning horse or what they think the winning horse is going to be. And its sad that this mentality is everywhere, about numbers, markets, and 'mass bro', instead of the work.

On seeing these tweets of Ashwin, popular costume designer Vasuki Bhaskar who worked in many blockbuster films such as Mankatha, Aarambam etc, said that many Sushant Singh Rajputs are existing in tamil film industry with no pay and recognition. She who said that many such actors spoke to her about their struggles, asked all of them to remember actor Ajith Kumar during their tough times.

There are many a #SushantSingRajput in our tamil film industry who get no payment ,no support,no recognition yet they put a brave front n smile to e camera.few speak 2me few remain silent in pain 2suffer humiliation in a diff. form. To so many such,remember thala Ajith then n now https://t.co/L3wCUZSVVd

It is widely believed that actor Ajith Kumar, who entered film industry with no cinema background, struggled a lot during the initial period of his acting career. He who faced several rejections and humiliations due to his slang and looks, has reached the top spot in Kollywood through his determined nature and hard work. He is one of the highest paid actors with huge fanbase in Kollywood right now.

Makkal Needhi Maiam (MNM) president Kamal Haasan Wednesday announced the first list of candidates who will be contesting on the ‘Torch Light’ symbol for...

Actor Riythvika, who was thus far considered an underdog at Bigg Boss Tamil Season 2, emerged the winner of the most viewed reality show, winning...