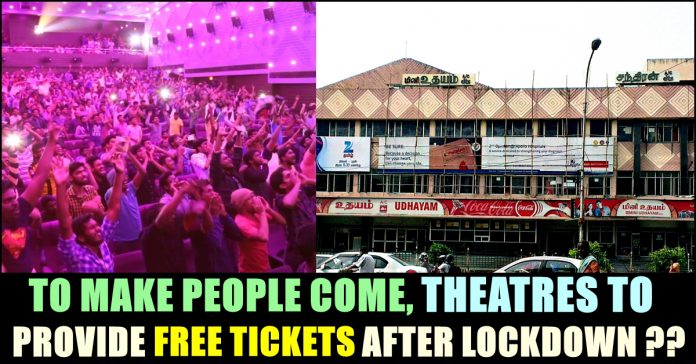 The lockdown period has been extended by the Indian government till May 3rd. The announcement was made by the Prime Minister of our country on the final day of initial lockdown period which is 14 of April. The decision was taken as the number of corona cases in India are increasing day by day is large manner. So far more than 10,000 positive corona cases has been reported in the country. Tamilnadu has reported more than 1000 positive cases with 11 deaths.

To avoid community spread in India, Prime minister of the country asked people to stay home for 19 days more which is till May 3. Daily labours, Industrialists, Entrepreneurs and people working in almost every field are suffering financially due to the Corona outbreak. Owners of cinema theatres are also no exception as it will take at least two months from now for films to release and for things to get normal.

Though if the lockdown ends, there is a big problem in releasing movies in theatres as people would think twice before mingling with each other after what happened. To make them visit their theatres, theatre owners might provide free tickets for few days by screening old movies it seems. They are also planning to renovate their space in a way of encouraging social distancing, according to Touring Talkies, a popular youtube channel of veteran filmmaker Chithra Lakshmanan.

Major disappointment among the fans of Tamil cinema is the postpones of their favourite actor’s upcoming movies. “Master” which was supposed to get a theatrical release on 9th of April got postponed. Vikram’s Cobra, makers of which released their first look recently forced to reach India while they are shooting in a foreign location. Surya’s Soorarai Pottru and Ajith’s Valimai are also facing similar problems in the production of their films due to the corona crisis. However, even if these films gets a theatrical release as soon as the lockdown ends, there will be no audience to watch it in theatres apart from the fans of the above mentioned actors.

Now, one of a reporter from Touring Talkies says that he came to know that a theatre owner is ready to sell free tickets for few days to gain his customers back. “When I was talking to a theatre owner, he said that he is completely ready to face the after effects of Coronavirus. He is planning to make people sit with at least 3 seats between them by sealing the empty seats. He also said that he is going to renovate the toilet to help people maintain social distancing.” he said.

The theatre owner is even planning to increase the duration of Interval to make people maintain social distancing. “To make his customers have this habit while visiting his theatre, he is planning to screen old films for first few days for free of cost.” the movie journalist further added.

In this case, many prominent theatres in Tamilnadu will also look for alternative ideas to bring back their old customers after the end of this lockdown. However, to implement these plans, we should get over the deadly disease by maintaining social distancing in this lockdown period.

Comment your views on this decision made by the particular theatre owner !!

Previous articleAishwarya Rajesh Finally Replied To Those Who Questioned Her Origin !!
Next articleChinmayi’s Gesture To Help Daily Labours Winning The Internet !!

Everytime the production house of "Varisu" comes up with a statistic about their film's collection, Mr. Raahul, executive producer of "Thunivu" movie gives a...

Popular actor and politician Udhayanithi Stalin's comment on Sivakarthikeyan's one of the recent movies "Don" made users of online platforms to share it widely...

“This Is Why Losliya Abandoned Me” Mohan Vaidhya’s Shocking Statements !!

Mohan Vaithya is busy in giving interviews to the media houses after getting eliminated from the BIGG BOSS house. In this interview with Behindwoods,...