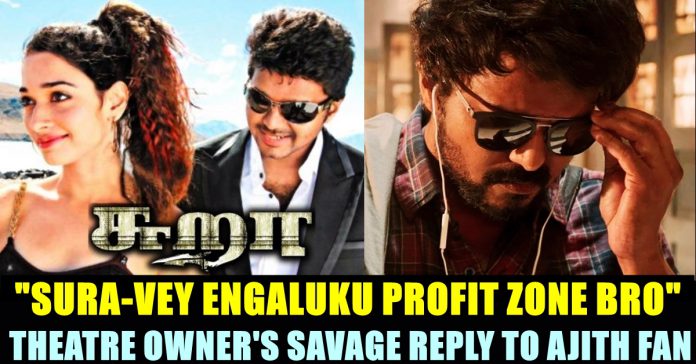 Amidst of Master’s OTT release, several kind of reactions are surfacing in Internet from the fans of Tamil cinema. Some of the ardent fans of actor Vijay who wanted their idol’s film to collect more in theatres, expressed their disappointment and said that the film should get released on Amazon after 10 more days. However, the film started streaming in the OTT platform since the midnight of 29th January.

Meanwhile, a twitter user mocked a tweet posted by the owner of Ram Muthuram cinemas, a popular theatre that is located in Thirunelveli. Replying to him, the theatre owner who is known as a die hard fan of actor Vijay, replied saying that Master already provided the profit he expected. He also said that the actor’s “Sura” film gave him a considerable profit.

After receiving a massive response from the audience during the Pongal festival, Makers of “Master” decided to release the film on Amazon Prime Video from 29th of January. The film which was directed by Lokesh Kanagaraj, had Vijay, Vijay Sethupathi, Malavika Mohanan, Arjun Das in the lead roles. The report on the film getting released after 16 days of theatrical release has left the ardent fans of actor Vijay in a confused state. However, it has been discovered that the makers have made this decision for the people who are residing in foreign countries as they couldn’t witness the film in big screen.

Replying to this tweet, Ram Muthuram cinemas made a reply saying that even “Sura” which is believed as a box office dud, gained their theatre a profit. He also added a picture of actor Vijay from “Sarkkar” movie to his tweet and said that “Master” is unstoppable in their theatre.

“Sura” is the 50th film of actor Vijay and got released in the year 2010. The film got highly criticized by the fans and by the critics for its flawed content. However, this tweet from the theatre owner garnered huge response from the online fans of actor Vijay. With nearly 3,000 shares and 6,000 likes, the tweet is going viral among the fans of the “Master” actor.

Previous articleJUST IN : Rajinikanth’s Next Film After “Annaththe” Confirmed ??!! WATCH
Next articleActor Vivekh Responded To An Online User Who Termed Actors As “Koothadi” !!