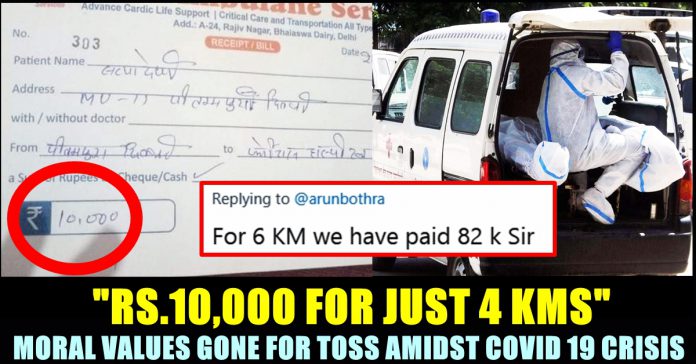 Amidst the second wave of COVID 19 virus, frontline workers are putting their lives on the line to control damage. Doctors, Nurses, health workers are being lauded by the public for their work but the situation is also bringing out the worst in some people. A recent tweet uploaded by IPS officer Arun Bothra is a prime example for how some people are exploiting the situation to make more money, instead of helping the public.

Tweeting about the incident that took place in Delhi, IPS officer Arun Bothra shared a receipt given by DK Ambulance service for payment of Rs.10,000 to take a patient from Pitampura to Fortis hospital, a 4 kilometre distance. On April 28, the IPS officer shared a tweet writing “Ten thousand rupees for a distance of four kms. Ambulance rental in Delhi. The world is watching us today. Not only the devastation but also our moral values.” and added a picture of the receipt.

Ten thousand rupees for a distance of four kms. Ambulance rental in Delhi.

The world is watching us today. Not only the devastation but also our moral values. pic.twitter.com/dZoJpSbF6c

Many people agreed with the tweet of Arun and started sharing the experience they went through. “Quoting your lines ” You may extort some money from people in pain but someday your Karma will come back to settle this account” KARMA WAITING” a social media user replied whereas another one said “For 6 KM we have paid 82 k Sir”

I have bought Oxygen Concentrator for 2Lakhs. Original price of the device is 79,500

One of my friend's father required #Tocilizumab injection which normally costs 37k-44K.. But in market now they say 4.25 lakhs – all human morale gone for Toss.. pic.twitter.com/D3R7jfY4hs

To organise a cremation. 60k.

Those who can loot are looting.

Morality can go take a walk.

Sir, during floods in Chennai, water can was Rs 500. Milk pocket of half a litre Rs 100. During bandh times, auto man charges sky high. I feel sir each one of the Indian is honest as long as no opportunity is available. The moment it is there, just blood curdling mercenary job.

I personally paid 3k for ambulance for 4 kms.. When I asked him shockingly 3k he said 3.5k hai actually, aapko 500 discount diya.. 😐

A family was asked to pay Rs 80,000 for an ambulance (Delhi to Jalandhar)

This is what happening now 😠 pic.twitter.com/VHrIGjxjC6

On Thursday, Delhi reported 24,255 new COVID 19 positive cases, 395 deaths and 25,615 recoveries. Hospitals across Delhi suffering the shortage of medical oxygen refill and many deaths have been reported in past few weeks due to oxygen shortage in many hospitals.

Previous articleSimbu’s Heartfelt Message On The Unexpected Demise Of K.V Anand !!
Next article“There Is An Army Of Us With You” – Celebrities Supporting Siddharth Along With Public !!