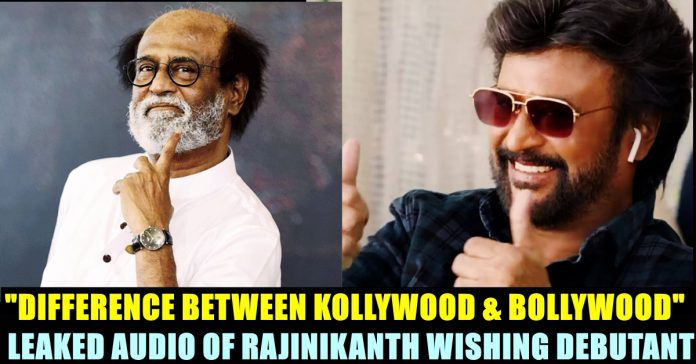 A leaked audio of Superstar Rajinikanth having a conversation with a debutant named as “Desingh Periyasamy” is trending in Internet. The “Kaala” actor who watched Desingh’s recently released “Kannum Kannum Kollayadithaal” personally contacted the filmmaker and wished him with his whole heart. The leaked audio conversation went viral and people are lauding the humbleness of the Superstar actor who has no necessity to call the filmmaker voluntarily.

“Kannum Kannum Kollayadithaal” of Dulquer Salmaan is probably the last film most of us would have watched in theatres before lockdown. The film which was written and directed by Desingh Periyasamy, took 5 years since Pooja to complete and released on 28th of February, 2020 only to impress both audience and the critics. It is one of the very few films that received 100% of positive review from popular Tamil movie reviewer Blue Satta Maaran. Apart from Dulquer, the romantic heist comedy stars Ritu Varma, Rakshan and Niranjani Ahathian in prominent roles.

The film is based on the four leading characters trying to pull of a heist that is next to impossible by using their unique skill of conning people. Director Gautham menon appeared as a police officer and left the audience in splits. Rakshan, making his debut to silver screen, got his face recognized to the mainstream audience. “Pelli Chupulu” fame Ritu Varma’s versatile acting in the film is going to grab her a number of opportunities from the top heroes of Tamil film industry in coming days for sure.

Now, above all, the director of the film received appreciation from Superstar Rajinikanth and the most surprising aspect about the conversation is, he asked Desingh to prepare a script for him in a serious note. There can’t be a better day for Desingh in his entire life as he is an ardent fan of “Thalaivar” that he started his film with a card thanking Rajinikanth for inspiring him.

“I have watched your film yesterday, Super, Excellent nga. I never knew anything about the film till watching. Really I was taken aback.” said Rajinikanth who asked apology to Desingh for watching the film after so many days. “You have a bright future in filmmaking.” said Rajinikanth.

“Think some script for me too.” said Superstar Rajinikanth only to give virtual wings to Desingh to fly. “Seriously, you think of something for me” he added. Desingh accepted the offer with his whole heart.

Desingh initially posted a tweet without mentioning the name. He thanked all his fellow Rajinikanth fans who waited for it to happen.

Posting about the leaked audio conversation, Desingh said that he is not happy with it but convinced himself saying that everything happens for a reason.

Superstar Rajinikanth has a 40 years of legacy in film industry and he is not at all required to personally call and wish a debutant. This gesture from him made people wonder and one of an internet user summed up the whole incident with a single phrase “Difference between kollywood and Bollywood”.

Check out few of the reactions below :

Alhena and Aishu who were participating in the Dance Vs Dance show of Colors TV, got eliminated from the show in the semi finals...

CHENNAI SHOCKER : 4 Murders In 24 Hours Including One Infront Of DG Viashnava , Horrific !!

4 cold blooded murders within 24 hours rocks the capital city of Tamilnadu. Residents of Chennai city in utter shock as the murders took...

Two year old tweet of Superstar Rajinikanth about himself announcing his political party got resurfaced and is trending in the social media platforms. In...