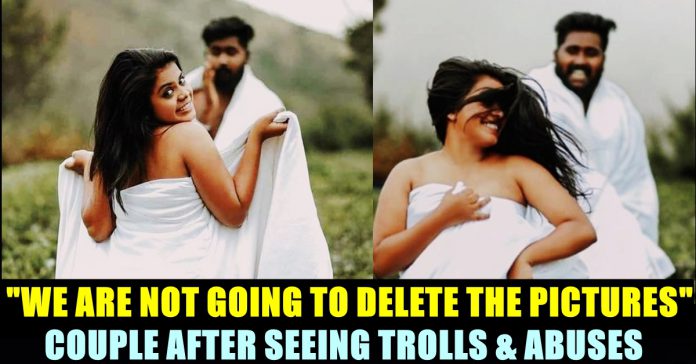 The Viral Couple Reacted To The Abusive Trolls & Memes !!

Rishi and Lakshmi, the Kerala based couple who went viral among the netizens due to their post wedding photoshoot, reacted to the abusive trolls and memes that surfaced for their photographs. The couple said that the amount of moral policing they are receiving from Internet and from the people they know in real life is immense. They who firmly denied to remove the photographs from their respective social media accounts, shared the trauma they went through for uploading them.

Rishi Karthikeyan and Lakshmi got married on 16th of September. Due to the lockdown restrictions implemented by the government, the couple couldn’t have a photoshoot during their wedding. However, they decided to have a photoshoot post the wedding with the help of their photographer-friend Akhil Karthikeyan.

Akhil is the one who suggested the couple to go for a boudoir session where the models are supposed to wear sexy outfits, lingerie, dresses, or even go scantily clad. The couple decided to use a white sheet to drape around them for the photoshoot.

The photoshoot was took place at a beautiful spot among the tea plantations at Vagamon in Kerala’s Idukki district where the couple celebrated their honeymoon. Rishi felt that ordinary wedding photoshoots are cliched and wanted to do something different. He who doesn’t wanted to do the regular marriage photoshoots where the couple would be seen wearing the traditional outfits, walking around the temple, went on with the suggestion made by his photographer friend Arun who is running a Wedding photography company.

After conducting the photoshoot successfully, the couple uploaded the pictures in their social media accounts, only to receive harsh criticisms from the users of it. The pictures which were uploaded on 15th of October subjected to trolls and abuses.

According to The News Minute, Rishi said that they were very much clothed throughout the photoshoot unlike what Netizens assumed. He said that it is impossible to shoot without clothes in an outdoor like Vagamon. Rishi gave credits to the photographer for capturing the pictures with such aesthetic sense. He further said that the users of Facebook started moral policing him and his wife due to the nature of the pictures.

Being a 26 year old woman, Lakshmi who got introduced to off shoulder clothes and shorts way earlier, felt that their post wedding photographs doesn’t contain nudity at all. However, she got severely criticised for the photographs. Lakshmi who initially responded to few trolls and criticisms, decided ignore them due to the vast reach of their posts.

Along with trolls, Lakshmi’s distant relatives starting calling her parents to complain about it, says sources. They reportedly asked why would Lakshmi and Rishi shot something that is supposed to take place within four walls. Some of the social media users even asked the young lady whether she wearing any clothes underneath the white sheet.

However, Lakshmi cleared the air among her parents by having a conversation with them. The couple who are not intended to delete the photos from their profile, said that they are keen on keeping the photographs as their long lasting memory. Rishi believed that the social media furore will fade in a day or two and doesn’t wanted to waste his energy on it.

Previous articleAmala Paul’s Savage Reply To A Follower Who Made An Obscene Comment !!
Next articleJacquline’s Sharp Reply To Those Who Trolled Her Voice !!

Gabriella’s Emotional Reply To Those Who Criticized Her For Venturing Into a Serial !!

Gabriella Charlton of Bigg Boss fame replied to her Instagram followers who criticized her for venturing into serials instead of waiting for a good...