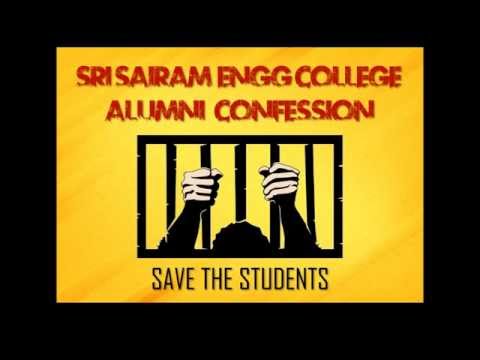 “I was taken to a dark room where they beat me with lathis. My crime was to have worn a black shirt to college.”

This is what Lokanathan, an engineering graduate, has to say about his years in Sri Sai Ram Engineering college of Chennai. His testimony was released in a video by a group of former students.
Lokanathan, Dinesh Kumar, Pradeep Durairaj, Zaufer Sadiq and an anonymous person, who claim to have passed out from the college in 2007, paint a grim picture of the happenings on campus.
Students currently studying in Sri Sai Ram engineering college have been at loggerheads with the management for days now, demanding the ouster of a man called Balu, who they allege is not merely a campus manager, but a rowdy whose only duty was to “discipline” students using humiliating and sometimes violent methods.
The college first made headlines after an advisory with sexist and regressive rules surfaced. This including rules that barred girls from speaking to boys and prohibited them from having social media accounts. Although the college denied it, protests soon erupted against the strict rules and the college manager Balu.
The video with testimonies has been released at a time when some of the students plan to go on a hunger strike demanding the college to sack Balu.
All the five former students who appear in the video allege that Balu’s ‘atrocities’ had terrorised them when in college and say they are appalled that even after a decade, things remain the same.
“Floor supervisors are just rowdies hired by the management to ‘discipline’ students. Wearing white shirt and black pants, they would roam around the college,” says Dinesh Kumar, explaining that each floor of the college was policed by a supervisor functioning under Balu.
Pradeep Durairaj’s testimony was more descriptive: “In a college where educated people impart education to others, you can imagine what these people would be doing. They are just goons. They would catch hold of girls’ hair and ask, ‘With this kind of face, you have come to study?’ (or) they would ask girls why their clothes were tight, they would ask this in a demeaning way in front of all.”
Zaufer Sadiq describes how he was once punished for sporting a beard. “I once grew a small beard. Balu handed me a blade, not a razor and asked me to shave it. After I finished scraping my beard, with bruises all over, I was asked to pay Rs 200 as fine.”
Not just former students, current students too have spoken extensively to the media about Balu, but the college’s decision not to take any action has raised suspicion over whether the manager has more control over the college than is known.