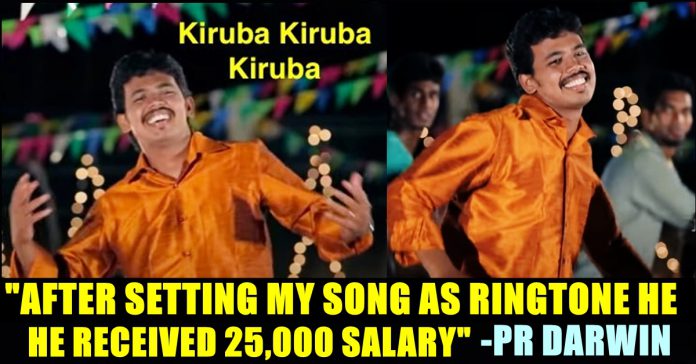 For the past three days, Tamil meme nation is extremely busy celebrating the mighty “Kiruba Kiruba Kiruba” song made by Pastor Darwin Ebenezar. The religious song which was released in the year 2014 in youtube, is having its prime time now among the netizens who are sharing it in their respective social media accounts. It is widely being used as the background music in the video clippings of popular cricket players, cinema stars, ;political personalities etc.

The song shows pastor Darwin Ebenazar praising lord Jesus and celebrating the blessings he received from him throughout his life. Pastor says that he is existing in this world only because of the blessings of Jesus. When his friends say that he earned everything in his life by using his talent, Edwin says “Talent ellam onnum illa brother, Kiruba Kiruba Kiruba” which attracted the netizens big time.

Check out some of the posts and videos surfaced using this song as background music :

The beauty of this video is the sync with which this was edited.

Another one for Kiruba 🔥 pic.twitter.com/W1ZOjG9mPX

I am not addict to drugs… I am already addicted to kiruba🔥🔥#SooraraiPottru pic.twitter.com/jXiEb9oqdf

As his song went insanely viral, Darwin himself appeared in an interview and shared about the making of his song. He said that he got severely injured after an accident years earlier. After completely getting recovered from it, Edwin made this song to thank lord jesus.

He said that he is a shy person by nature but was taken aback by seeing the immense response for his song after 6 years. “When I was driving a Maruthi van, we got rammed by a Lorry. At that time, I got severely injured with 5 fractures in my body. Even doctors said that I would not make it. But due to everyone’s prayer, I recovered. After recovering from the deadly injury, I got the idea of making this song” he said.

“I only thought that my song would reach among Christian world. But never expected that it would go viral.” Pastor said. When he was asked how he feels on seeing the memes, Darwin shared an incident he heard. According to him, a guy who was working in a mediocre job, started receiving Rs. 25,000 as salary after keeping his “Kiruba Kiruba” song as his mobile ringtone. ” i got extremely happy on hearing about it. I would be even more happier if that brother gives us the royalty” he said.

Darwin wanted to make it clear that a lyric in his song which says that he became successful in life despite of lack of education is not true. “I am a post graduate and studies is very much important. The line was added to encourage the students who are committing suicide due to exam failure” Darwin said.