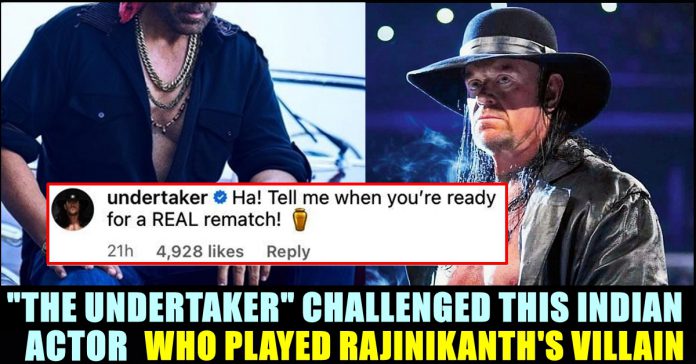 On the 25th anniversary of his 1996 film “Khiladiyo Khiladi”, Bollywood actor Akshay kumar who recently acted as an antagonist for Rajinikanth in 2.0, uploaded a post in his official Instagram account celebrating the special occasion. In the film which revolves around crime and wrestling of that time, an actor appeared as WWE Superstar “The Undertaker” who is very much popular among the fans of the show. Now, in his post, Akshay uploaded a cheeky post saying that he is one of the very few people who defeated “Undertaker”. Surprisingly, the WWE Super star replied to the post of Akshay and challenged him for a rematch.

Posting the pictures of Brock Lesnar, Triple H and Roman Reigns, Akshay Kumar wrote “A hilarious note to mark 25 years to the release of #KhiladiyonKaKhiladi tomorrow! A fun fact though: it was wrestler Brian Lee who played The Undertaker in the film 😊” in his post.

While many celebrities of Bollywood film industry poured their wishes for the mark, along with thousands of fans, unexpectedly, The Undertaker himself happened to see the post and he chose to reply to it as well. The man who is known for his wide range of experience in WWE industry, challenged Akshay for a real rematch.

“Ha ! Tell me when you are ready for a real rematch” he commented and Akshay, hilariously replied writing “Let me check on my insurance and get back bro”

Check out the reply of Undertaker and Akshay’s reply to it :

Check out the fight scene that took place between fictional Undertaker and Akshay Kumar below :

Undertaker is best known for his career in WWE from 1990 to 2020. “The Undertaker” gained significant mainstream popularity as a horror-themed, macabre entity who employed scare tactics and held links to the supernatural. The longest-tenured wrestler in company history at 30 years, Undertaker is heavily associated with WWE’s flagship annual event, WrestleMania, where he became known for The Streak, a series of 21 straight victories.

Public demands Undertaker vs Akshay Kumar in next WrestleMania

This is getting interesting! https://t.co/fegxhc8BC2

10 Secrets That Girls Generally Share Only With Their GirlFriends !! ONLY !!

A girl can be mean and bitchy, but with her best friend she can give her heart away. She can share her secrets with...