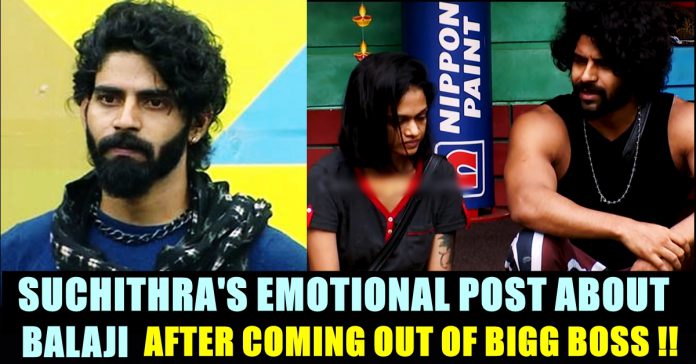 After getting evicted from the show, Suchithra is still stretching her supportive hand to Balaji Murugadoss, one of her co-contestant with whom she had a strong bonding during her stint. The duo created songs together and the singer spent most of her time with him. Now, during the wee hours of Wednesday, Suchithra came up with a post saying that Balaji could not fake anything by adding hashtags “Balaji Army”, “Balaji Murugadoss” etc.

Suchithra who entered the house as a “wildcard entrant”, spent three weeks in the Bigg Boss house. While getting evicted, Suchithra said to Kamal Haasan that her father appeared in her dreams and told her to get out of the house as nothing about her were telecasted. She also expressed her fear of mass trolls and criticisms in social media. However, the radio jockey was well received by the netizens which is evident through the comments she is receiving for her Instagram posts.

Suchithra who entered the house as a wild card contestant, got eliminated due to the less number of votes she received from the audience. She who just had a short span of time to grab a spot in the hearts of the audience, failed to do it, it seems. Suchithra got nominated for the eviction with 9 votes from the housemates.

Now, the singer who could have watched the yesterday’s episode and the episodes in which she got involved in, uploaded a picture of Balaji shedding tears and wrote “The face that cannot fake anything #BalajiMurugadoss #Balajiarmy #BiggBossTamil4 #thesadtruth #theunseentruth” as her caption.

During her final conversation with Kamal Haasan before walking out of the show, Suchi said that Bigg Boss is her most favourite show and added that she entered the house as a fan girl. The radio jockey also said that she wanted to get her singing career back by participating in the show. After watching her compilation video, Suchi humorously said to Kamal Haasan that she looks ugly in the frame which could be one of the reason for the less number of votes she received. Also Read : Mirchi Suchi’s Emotional Post After Getting Out Of BIGG BOSS House !!

Previous article“Kurumpadam” Of Samyuktha Goes Viral !! WATCH
Next articleChembarambakkam To Be Released By 12 PM !! Why Adyar River ??

Renowned Journalist Nakkheeran Gopal who is known for shedding light on the truth in the serious issues that are taking place in the society...