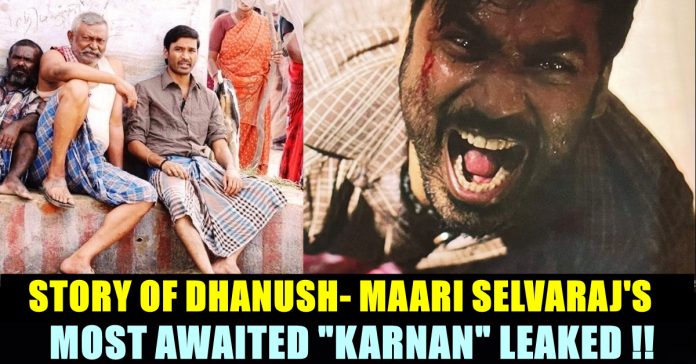 The Most Awaited “Karnan” Story Leaked ??

“Pariyerum Perumal” fame Maari Selvaraj’s next venture “Karnan” starring Dhanush is nearing its theatrical release as the makers have recently updated about the status of the film’s production. Kalaipuli S Dhanu who is producing the film said that Dhanush have completed dubbing for his film through his official twitter account and the fans of Tamil cinema are eagerly waiting to witness the rural drama. Meanwhile, reports emerged revealing the plot of the film which promised a revolutionary period drama through its posters and working stills.

Sharing a picture from the film, Dhanush uploaded a post in his official Instagram account with a caption saying “karnan dubbing completed. You WILL hear his voice”

#karnan dubbing completed. You WILL hear his voice 🗡 🐘 pic.twitter.com/T2Vkz32bky

Makers are planning to release the film during April month in theatres and confirmed the same through an official press release. Maari selvaraj who impressed the critics and audience of Tamil cinema through his debut film “Pariyarum Perumal”, has already increased enough anticipation among the fans.

Now, according to the movie journalists of Valaipechu youtube channel, the film is a period drama that takes place in 1980’s. They confirmed that the film is not a story that revolves around a labourer of Manjolai thottam but completely a different one. The film is about a youth (played by Dhanush) who fights against the government authorities and against the leaders with caste background to make the government allow buses to his village, according to Valaipechu.

It is very well known that people who belong to particular castes, restricted buses to certain villages in order to follow caste discrimination such as untouchability since very long time. Maari Selvaraj who talked against caste discrimination in an efficient way in his debut film, is expected to deliver a blinder this time. However, we have to wait till April for the release of the film to confirm the plot.

Dhanush, on the work front, is having a dozens of film in his kitty which includes an Hollywood project of Russo brothers. While his Jagame Thanthiram is awaiting to get released on Amazon, Karthik Naren’s next, Selvaraghavan’s Naane varuven, Atrangi Re in Bollywood, a film with “Ratchasan” fame Ramkumar are some of his upcoming projects. Maari Selvaraj is all set to direct Dhruv Vikram in his next under Pa. Ranjith’s Neelam productions.

Previous article“Imagine Giving Call Sheet To Act In An Important Portion & Seeing Yourself In Deleted Scenes” – Actress On “Master” Deleted Scene
Next articleSteyn’s Humble Reply To A Comparison Of Himself With Anderson Wins Internet !!

None of the eight IPL teams shortlisted Kerala based fast bowler S Sreeshanth in their team. The cricketer who recently made his comeback to...

For requesting people to quarantine themselves at this situation, actress Manjima Mohan who is known for appearing in films like "Achcham Enbathu madamayada", "Oru...

10 Places In Chennai Where You Get The Best Juicy Burger For Less Than Rs.500 For Your Gang!!

One of the cheesiest inventions of amazing food, BURGERS top the list for most of us. Just seeing all the cheese oozing out, the meat...